“He had to awkwardly teach me how to have fake sex.” 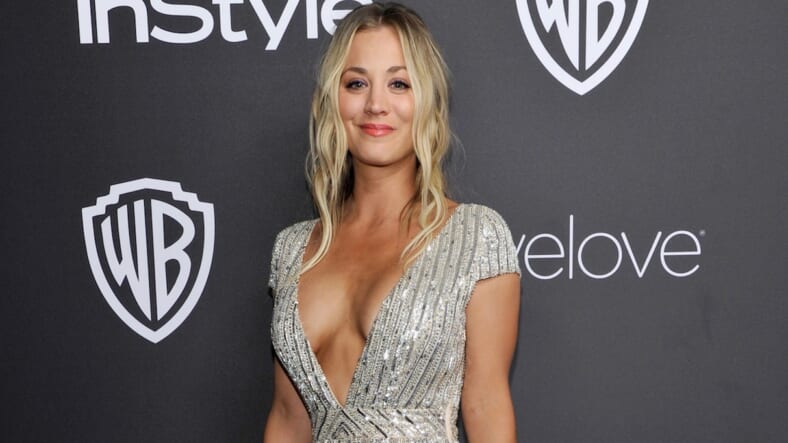 For Kaley Cuoco, acting out a mile-high scene as star of HBO Max’s The Flight Attendant didn’t come naturally. The Big Bang Theory alum revealed that an intimate on-screen moment between her title character Cassie Bowden and Michiel Huisman’s Alex Sokolov got a little awkward.

“Network 8 o’clock TV is a little different than HBO Max all hours of the night,” . “I had scenes like that on ‘Big Bang,’ but this was like a true sex scene,” Cuoco told USA Today.

“I told Michiel, ‘I’ve never done this before. Have you done it before?’ He goes, ‘Yeah, like 30, 40 times.’ And I was like, ‘WHAT?'” she recalled while sitting next to her husband and equestrian Karl Cook at their LA home.

As Penny, Cuoco played through a number of passionate sequences as the neighbor-turned-wife of scientist Leonard Hofstadter on the Chuck Lorre-produced sitcom, which wrapped after 12 seasons last year. But she still needed to consult with her co-star to get it right in The Flight Attendant.

“When they called action, I still wasn’t really giving my all,” she says. “Michiel finally goes, ‘It looks like you’re hovering over a public toilet. What are you doing?’ I’m like, ‘I don’t know what I’m doing.’ So he had to awkwardly teach me how to have fake sex.”

Cuoco, who also served as executive producer of the darkly comedic miniseries, added that this latest role has allowed her to show an expanded range in portraying a character with a serious alcohol problem and deep-seeded issues stemming from childhood.

“This is definitely my coming-out party in the sense of showing everyone I can do something other than comedy. It gets quite dark, quite emotional,” she added in her USA Today interview. “This is my way of pushing the door down and going, ‘I can do more and I love doing more.'”