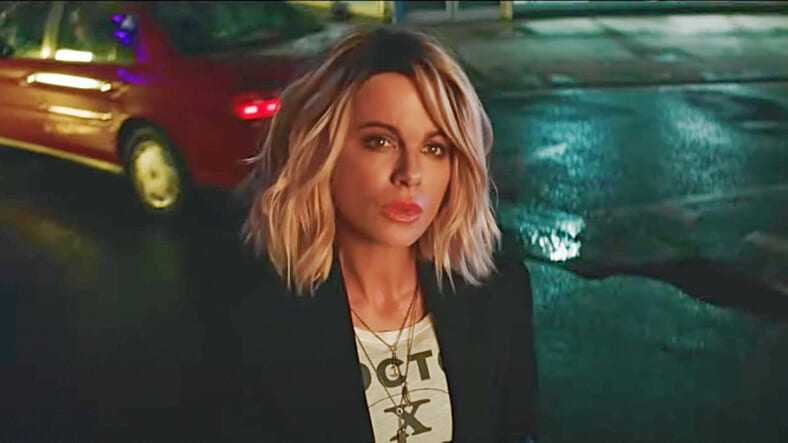 Example: The scene where she addresses a creepy older guy with, “You’re gonna make me go through the whole face-stomping, making a mess routine? Okay, fine.” It’s jarring but funny because she sounds so pleasant yet proceeds to do just what she said. It’s like Mary Poppins meets John Wick.

Charming as Beckinsale is offscreen with her witty but visually appealing Instagram presence, in previews of Jolt — she kicks ass with total authority, much as she did in the Underworld sci-fi horror series but without the helpful supernatural power.

Except Jolt‘s premise does essentially give her just that, only here we’re not talking vampiric strength and immortality but pure, unbridled rage.

Here’s the Amazon synopsis, which reveals a little more about events only hinted at in the trailer:

Lindy [Beckinsale] is a beautiful, sardonically funny woman with a painful secret: Due to a lifelong, rare neurological disorder, she experiences sporadic rage-filled, murderous impulses that can only be stopped when she shocks herself with a special electrode device. Unable to find love and connection in a world that fears her bizarre condition, she finally trusts a man long enough to fall in love, only to find him murdered the next day. Heartbroken and enraged, she embarks on a revenge-filled mission to find his killer, while also being pursued by the police as the crime’s prime suspect.

It’s a classic action plot, and the John Wick comparison holds if you think of the lead’s anger condition as analogous to Wick’s past as the most lethal assassin of them all and think of the man she falls for as John’s unfortunate murdered puppy.

There’s even a real condition like the one Beckinsale’s Lindy suffers — intermittent explosive disorder (though sufferers would probably say there’s nothing good about it). So the premise for Jolt isn’t even all that outlandish.

And it has Kate Beckinsale dispensing artful violence like Mary Poppins gave out spoonfuls of sugar. Works for us.