Katy Perry Kissed a 19-Year-Old ‘American Idol’ Contestant, And He Didn’t Like It

“I wanted to save it for my first relationship. I wanted it to be special.” 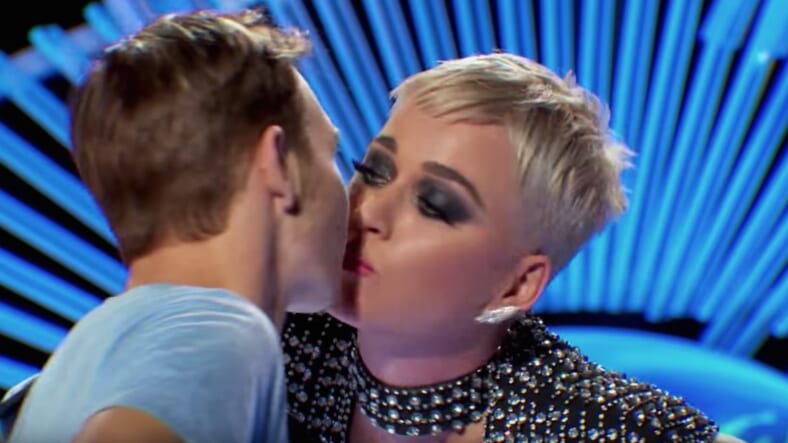 In the two-night premiere of the American Idol revival, judge Katy Perry has already aggressively flirted with one contestant, flashed another and stolen the sacred first kiss of a third.

The last-mentioned happened just before Benjamin Glaze, a 19-year-old cashier from Oklahoma, performed a song he had written, “Stadium,” as well as one from pop star Nick Jonas, “Levels.”

Before his audition, judge Luke Bryan asked Glaze if he had “kissed a girl and liked it,” a reference to Katy Perry’s hit song. When he admitted, “No, I’ve never been in a relationship,” KP beckoned him over to the judge’s desk to lay a wet one on him.

“No, wait! Hold on!” a visibly uncomfortable Glaze shouted, before conceding to his judge. The ensuing clip was as charming as it was cringe-inducing: his first attempt to kiss her cheek fails, and KP turns her mouth to lock lips during his second attempt.

“Katy!” he yells in thinly-veiled horror before eventually getting the boot from the judges. At least he scored with KP.

Wrong. Glaze just announced to The New York Times that he did not enjoy his kiss with thr pop bombshell one bit.

“I was a tad bit uncomfortable,” he said. “I wanted to save it for my first relationship. I wanted it to be special.”

“I know a lot of guys would be like, ‘Heck yeah!’ But for me, I was raised in a conservative family and I was uncomfortable immediately. I wanted my first kiss to be special.”