Keanu Reeves Told Stephen Colbert What Happens After We Die 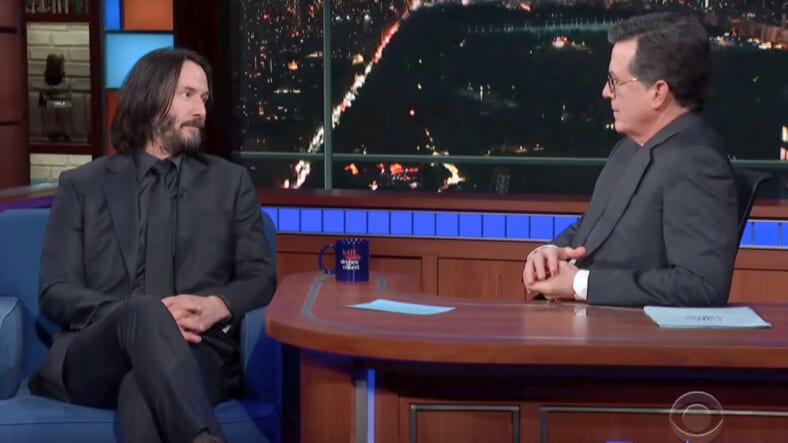 This viral exchange at the end of a recent Keanu Reeves interview on Stephen Colbert‘s The Late Show is pretty damn moving. It’s brief, almost a throwaway part of the conversation—unless you really listen.

It ends with Reeves making a statement that is at once obvious and somehow still profound, and it clearly hits Colbert in the feelings.

Reeves is doing the talk show circuit in anticipation of the opening of John Wick: Chapter 3—Parabellum. In the interview above he discussed fun stuff like trying to pull off moving combat while riding a horse. Then he and Colbert veered into more profound territory.

Oddly, the catalyst for these Deep Thoughts was Reeves’s description of the plot of the new Bill & Ted movie. In the long-awaited sci-fi comedy, the world may end unless Bill S. Preston (Alex Winter) and Ted “Theodore” Logan can write at least one more Wyld Stallyns song.

Colbert said, “So you’re facing your own mortality and the mortality of all existence. Wow.”

He continued, “What do you think happens when we die, Keanu Reeves?”

If you know enough about Reeves alone, you know this is one hell of a question for the guy. And for just a moment, he drops any actorly pretense. He’s no longer hustling his new flick. He pauses, then says, “I know that the ones who love us will miss us.”

This sincere, raw answer leaves Stephen Colbert speechless for a moment. It’s easy to believe he’s caught short by his own emotions, given the losses he faced as a child.

If you want the soul-crushing details, you can google Stephen Colbert or Keanu Reeves to find out just how much they have endured when it comes to the deaths of people they love. Suffice to say it’s enough to feel plenty of sympathy for both.

Keanu Reeves has been satirized—based on his playing both goofy and alternately, taciturn, expressionless characters—as kind of dumb. Say “Whoa” a certain way and everyone knows you’re making a joke related to or inspired the actor or a character like Ted “Theodore” Logan.

But it seems pretty clear that whatever his actual IQ, he’s not a shallow dude and he’s got a lot of heart.

Reeves brings all that plus an enviable ability to convincingly pull off kicking ass on screen even in his mid-50s to John Wick: Chapter 3—Parabellum.