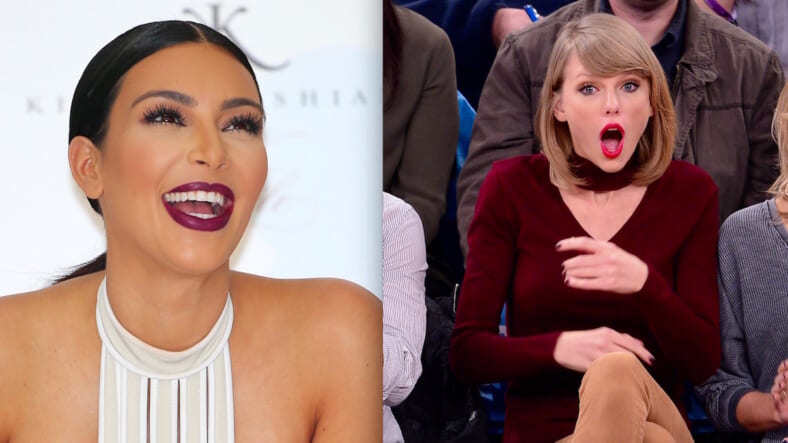 The Internet erupted Sunday night over the latest in the ongoing Taylor Swift/Kim Kardashian/Kanye West conflict–and now the feud is threatening to go nuclear.

In a Snapchat opened ’round the world, Kim Kardashian leaked a secretly filmed video of Taylor Swift giving Kanye her blessing to run that infamous line about her in his song “Famous.”

In the single, Kanye raps, “I feel like me and Taylor might still have sex, Why? I made that bitch famous.”

Kanye was, of course, referring to the night he famously interrupted Taylor’s acceptance speech for Best Female Video at the 2009 MTV Video Music Awards.

In the covert footage released by Kardashian, T-Swift is heard telling Kanye over the phone, “It’s like a compliment. I really appreciate you telling me about it. That’s really nice.”

“I just had a responsibility to you as a friend. Thanks for being so cool about it,” Kanye responds.

Never mind that the video might be illegal, it has led some to accuse Swift of lying about the lyric. The long-limbed pop star previously claimed she wasn’t warned about it beforehand and that she felt attacked by it.

During her acceptance speech for the 2016 Album of the Year, T-Swift made an obvious dig at the rapper, even painting him as a misogynist:

“I want to say to all the young women out there, there are going to be people along the way who will try to undercut your success or take credit for your accomplishments, or your fame.”

When Kanye claimed Taylor had given him approval, Team Taylor countered with a statement:

“Kanye did not call for approval, but to ask Taylor to release his single ‘Famous’ on her Twitter account. … She declined and cautioned him about releasing a song with such a strong misogynistic message. Taylor was never made aware of the actual lyric.”

At the time, it seemed like Taylor came out on top, but things took a turn when Kim K called Taylor a liar in her recent GQ profile and even hinted that the truth would come out.

“She totally approved that,” Kim said. “She totally knew that that was coming out. She wanted to all of a sudden act like she didn’t.”

“I swear, my husband gets so much shit for things [when] he really was doing proper protocol and even called to get it approved.”

Her Snapchat, indeed, seems to back up her Kanye’s claims that Taylor was playing the victim for attention. However, the video only shows Taylor Swift agreeing to the “I feel like me and Taylor might still have sex” line.

In a statement just posted to her Twitter, T-Swift still says she wasn’t apprised of the rest of the lyric, particularly the bit where she is referred to as “that bitch.”

Naturally, members of T-Swift’s #squad, like Selena Gomez and Martha Hunt, are rallying around their fearless leader.

There are more important things to talk about… Why can't people use their voice for something that fucking matters?

It's pathetic how quick our culture is to sensationalize a fabricated story..

In another spat, noted Kardashian critic Chloë Grace Moretz took aim at everyone paying the saga too much attention, which prompted Khloé Kardashian to hit back with this…

Those Harry Potter specs really give him some added authority, don’t they?

Katy Perry also seized the chance to spread some love (and self-promotion for her album Rise).

#RISE above it all: https://t.co/ToeZNtE4rE

Even with all her celebrity support, many on Twitter say this spells trouble for T-Swift. Even if she didn’t know the full lyric, she certainly did lie when she claimed Kanye never called for permission.

But don’t feel too bad for our beautiful and talented 2015 Hot 100 winner. After all, if you’re the world’s highest-earning celebrity, you can handle an occasional Snapchat video diss.