Guys Are Using The ‘King of Queens’ Theme Song As A Love Poem, and the Reactions Are Priceless

This is absolutely hilarious. 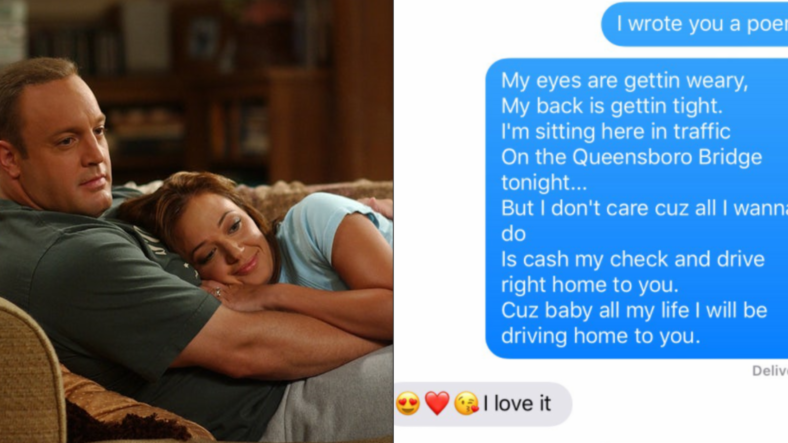 King of Queens wrapped its final season just over a decade ago, but mentions of Kevin James’ classic sitcom have recently surged online thanks to a hysterical new texting trend.

Enterprising dudes have been slyly passing the lyrics to the show’s theme song, “Baby All My Life I Will Be Driving Home to You” by Billy Vera and the Beaters, off as a personal love poem to their girlfriends.

Reactions, while varied, are absolutely hilarious across the board.

I told my girlfriend I wrote her a poem but it was just the theme song to King of Queens. pic.twitter.com/2B1H6n7XtX

Less than 24 hours after Recine tweeted the screen grab, other dudes eagerly tried the trick out on their significant others. Many were rewarded with an “I love you”, a heart emoji, kissing emoji, or combination of the three.

This really does work. pic.twitter.com/7E0alrsKD2

Others were less successful, as their wholly unimpressed girlfriends immediately recognized the lyrics as the sitcom’s theme song.

Uhhhh she caught on pic.twitter.com/HeHeGosU2s

Even if they didn’t make the connection, that didn’t ensure the hopelessly cheesy lyrics were well-received.

that didn't even work for a second… pic.twitter.com/dYmvE61QoS

If you are dying to try this “poem” out on your partner, do it now before the viral trend becomes too well-known to replicate.

Or, you could just pick another love song to plagiarize. There’s definitely an overabundance of bad ballads to choose from.