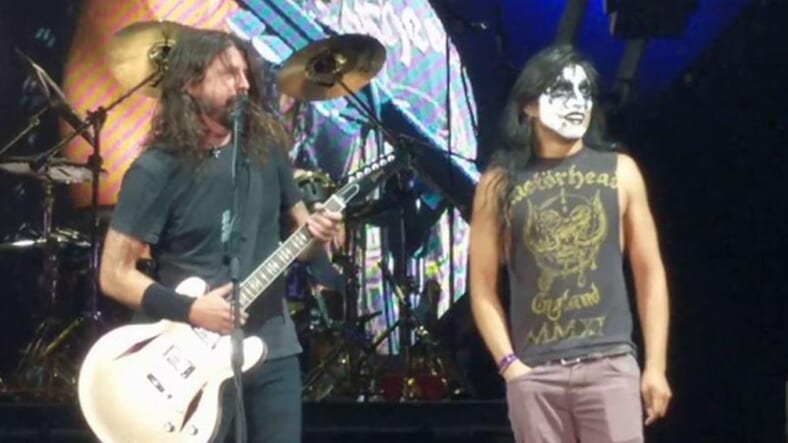 The Foo Fighters began their latest U.S. tour with a bang when they invited yet another musically talented superfan to jam with them on stage.

“Don’t get too excited yet,” Grohl advised in a longer recording of the performance. “You might shit the bed in your hometown, brother.”

After dubbing the fan “KISS Guy,” the band kicked in the intro. Any doubts about the guest guitarist’s ability vanished immediately as he shredded the entire tune and crushed two blistering solos.

Following the 7-minute jam, Grohl assured the crowd that the moment was 100 percent legit.

“Every time we get someone to come up and jam with us, people are like, ‘That was a setup.’ We’ve never done a setup.”

“Kiss Guy” also revealed his real name to be Yayo Sanchez. The Austin native took to Reddit after the show to confirm that it really was a total surprise.

Comment from discussion Dave Grohl of The Foo Fighters invites Fan Dressed as Gene Simmons on Stage and The Kid Shreds. Austin, Tx 4-18-18.

Better yet, Grohl revealed that Sanchez was the best fan the Foo Fighters have ever played with.

“I swear to god, Kiss Guy—he was the fucking best one we’ve ever had come up,” he said. “Goddamn, Kiss guy.”