A ‘Knight Rider’ Movie Is in the Works, And It Could Star John Cena and Kevin Hart as the Voice of KITT

If you like your Trans Ams with a little attitude, listen up. 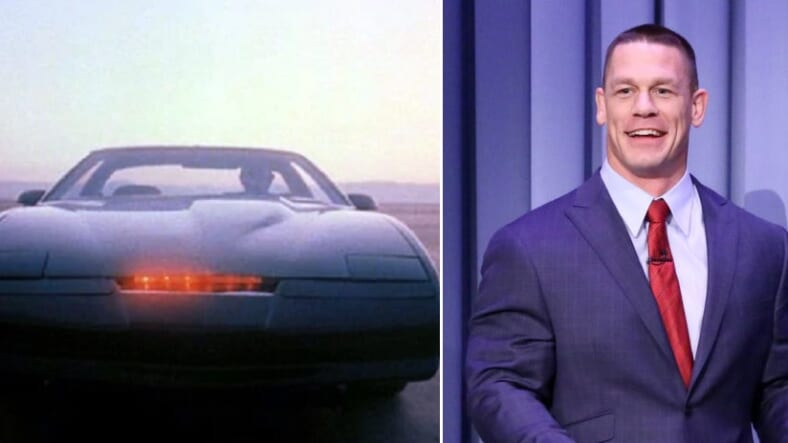 Knight Rider reboots are everywhere these days. David Hasselhoff excitedly told TMZ he’s in talks about doing one, and it sounded like he was talking about a TV series. Now ScreenRant reports Hollywood may be working on a separate movie reboot involving John Cena and Kevin Hart.

While the original TV show starring Hasselhoff may seem unintentionally funny in hindsight due to a certain ’80s cheese factor, the mention of Kevin Hart should be a clue as to where the company considering a new movie may go with the story:

A source close to Screen Rant has shared some details about Weinstein’s Knight Rider reboot, which is being conceived as a comedy in the vein of Phil Lord and Chris Miller’s 21 Jump Street. For the role of Knight, the studio is hoping to get WWE star John Cena, while omnipresent comedian Kevin Hart is seen as a possibility for the voice of KITT. It’s important to note that neither has been officially cast, and the Weinstein Company is simply interested in getting them onboard. If nothing else, this gives fans an idea of the tone the studio is looking for, combining Cena’s tough-guy action hero with Hart’s sense of humor.

It’s easy to roll our eyes at a lot of reboots. Yes, they’re a sign Hollywood is low on new ideas. Yes, they cater to the nostalgia of the audience members most likely to have disposable income.

But come on, the moment you consider Kevin Hart voicing KITT, it’s hard to not want to see where this could go.

It would also be just another step for Cena along the celebrity path blazed by Dwayne “The Rock” Johnson.

With all the talk of Johnson running for president one day, can we hold out hope that he and Cena could tag team the opposition instead of holding wimpy-ass debates?

One thing at a time. Let’s see if the WWE star gets behind the wheel of a trash-talking new KITT first. (And Rock/John Cena 2020 or 2024. Make it happen.)