Looking Back At the Highs and Lows of Kobe Bryant

On the eve of his retirement, let’s consider Bryant’s basketball legacy along with his failures as a human being. 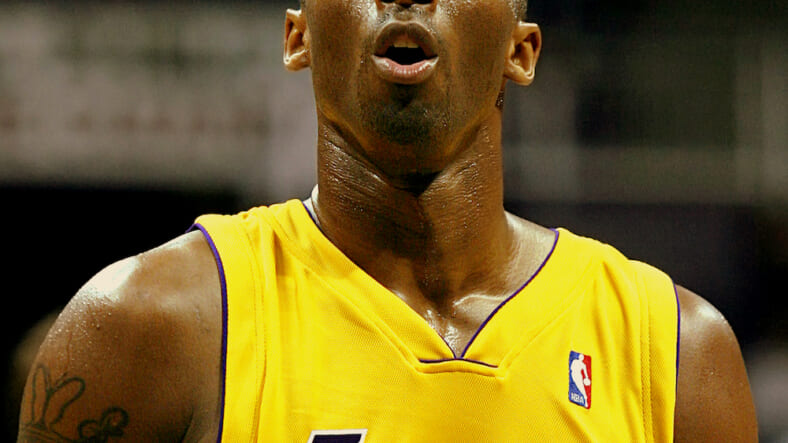 Apparently it’s Mamba Day. So says Nike, which is calling on basketball fans to celebrate Lakers legend Kobe Bryant as he mercifully puts a bow on an incredible NBA career. And many are obliging.

The reasons are obvious. When Kobe steps off the court at Staples Center for the last time, he’ll be the NBA’s third greatest scorer, with five championships, 17 All-Star Game selections and an MVP. For most of his career, before the injuries caught up with him, Kobe was a cold-blooded assassin. Forget the numbers and the records, Kobe’s passion and intensity made it easy to respect his game even if you weren’t a fan of his team.

But on a day when Kobe’s legacy will be celebrated in L.A. like he’s about to canonized, it’s worth noting that as great as he was on the court, he was a real shithead off of it.

This is a truth universally acknowledged. Even Nike, in its star- studded eulogy for Kobe’s career, included Kevin Durant calling him an “asshole.” It’s almost playful. Like when your grandpa says something racist and you say, “Dude’s a total bigot, but you gotta love him.”

Here’s the thing with Kobe, though: You don’t have to love him! Really. Even if you’re a Lakers fan (as I am) and you’ve spent countless hours watching Kobe the player lay waste to inferior players (as I have), you can acknowledge that Kobe the man is a character far less worthy of adulation.

Kobe’s nickname, the Black Mamba, is said to have come from his ability to move fast and strike rapidly, just like the snake. Another thing he shares with the venomous snake? He’s awful to be around.

“You can’t knock the man’s legacy, you can’t knock what he’s done in basketball,” said ex-teammate and frequent target of Kobe’s barbs, Smush Parker in 2012. “What I don’t like about him is the man that he is. His personality. How he treats people. I don’t like that side of Kobe Bryant.”

Kobe was a bully. He shut down teammates who he thought were unworthy of talking to him. He sucker punched them over $100. His personality is so toxic that noted Canadian Steve Nash even said he’s a “motherfucking asshole.” This side of Kobe softened a bit later in his career and, when talking to the media, it even came across as refreshing. He said things in interviews that no one else would, which sportswriters love. But there’s a reason on one else said them. They were shitty things to say.

Kobe didn’t just say shitty things, he did them. Like it or not, Kobe’s legacy includes his encounter with a 19-year-old concierge at a Colorado hotel in June of 2003. More importantly, it includes the aftermath, highlighted in this Think Progress piece, and the “legacy of victim blaming, media sensationalism, and image repair that still influences society — and other high-profile rape cases — to this day.”

It might seem cruel to bring up Kobe’s lowest moment on a day on which we’re supposed to celebrate him. But considering he received no punishment for having sex with a woman who he apologized to and said “did not consent to [the] encounter,” let’s just consider it a tiny bit of justice handed down 13 years too late.