“It’s a baby gun. It allows you to fire it while crying.” 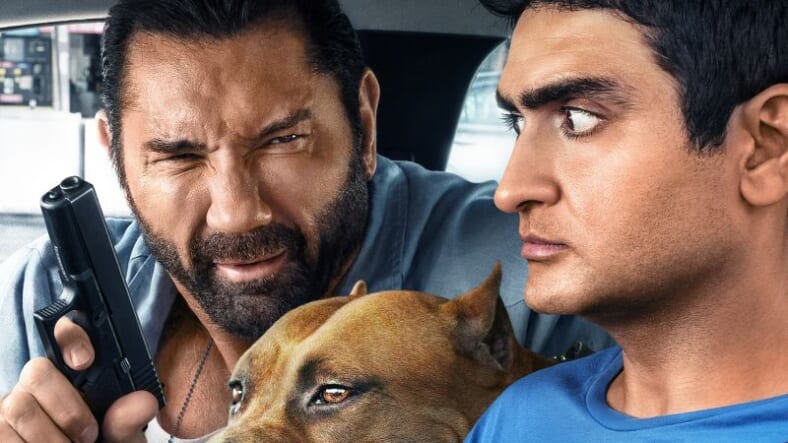 This smacks of someone in Hollywood saying, “what’s the least likely pairing of buds for a cop comedy?” Because really, it’s not like we were all clamoring for that Dave Bautista–Kumail Nanjiani joint.

That sounds mean, but the fact is if you watch the trailer above for Stuber, starring Bautista and Nanjiani, it looks like it works.

We’ve got Bautista, a human tank, gruff and ready for anything, and Nanjiani, playing sub-beta-male big time, terrified of this possibly rogue LA cop he just picked up while driving for Uber. And it’s pretty damn funny.

Here’s the synopsis for Stuber:

When a mild-mannered Uber driver named Stu (Kumail Nanjiani) picks up a passenger (Dave Bautista) who turns out to be a cop hot on the trail of a brutal killer, he’s thrust into a harrowing ordeal where he desperately tries to hold onto his wits, his life and his five-star rating.

It’s like a comedy flip of Tom Cruise’s and Jamie Foxx’s Collateral, a thriller in which Cruise’s gray-haired assassin commandeered Foxx’s cab on a murderous mission criss-crossing Los Angeles.

In that, Cruise played a very convincing bad guy, but it looks like the twist here is our protagonists are both good guys, and maybe Nanjiani’s character learns a little something about himself along the way.

As for Bautista? Of all the big former WWE stars to take on Hollywood, he’s the one who shows the most acting chops (watch his brief scene in Blade Runner 2049 and see what you think; dude can act). It’s gonna be fun to see what he does with comedy outside his blunt lines as Drax in the Guardians of the Galaxy movies.

Stuber is in theaters July 12.