We spoke with Saturday Night Live’s quirkiest cast member about the new Zoolander movie, what makes a funny character, and taking over Digital Short duties from Andy Samberg. 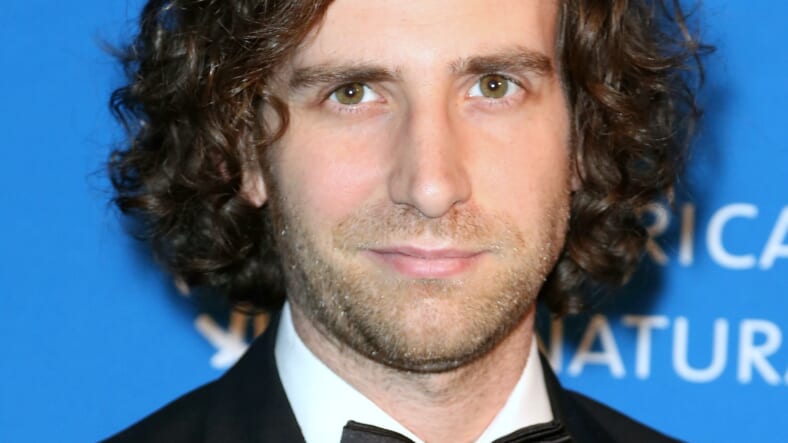 In 2013, comedian Kyle Mooney had the unique privilege of joining the cast of Saturday Night Live with his best friends right by his side. Along with comedy partner Beck Bennett and video director Dave McCary, Kyle’s sketch group known as Good Neighbor Stuff took the helm of SNL’s popular Digital Shorts after the departure of Andy Samberg’s The Lonely Island. The Good Neighbor crew has transformed the segments into showcases of brilliantly original scenarios, delightfully awkward man-on-the-street interviews and some of the quirkiest characters on TV.Maxim spoke with Mooney about his experience joining SNL with his friends, his creative process, and his role in the much-anticipated Zoolander 2.

So, I read that you come up with ideas for your characters by watching vlogs of random kids and taking note of their funny mannerisms. Are there other comedians that influence your work as much as everyday people?

Generally, with YouTube vlogs, it’s human nature that really interests me or inspires me. In terms of comedians, if you’re going far back, you can always go to Andy Kaufman. He did a lot of great stuff. But I’m honestly into everything. I still watch TGIF shows like Family Matters.

What kinds of qualities make for a funny character?

A lot of my characters are people who are in essence lying to themselves. They present one thing, when in reality they’re another thing. Maybe they’re not as tough or as cool as they want to be.In general, I’m just drawn to those dudes who exist in real life. It’s always exciting to create a character that people can relate to, where people are like ‘Oh, I know this dude,” but maybe you’ve never actually seen this type of character on TV. So, that’s something we seek out. I try to find those naturally funny people and bring them to light, because we all have friends from high school who are weird, or kids from high school that we didn’t like, and I’m always inspired by that stuff.

You do a lot of work with (Good Neighbor Stuff partners) Beck Bennett and Dave McCary at SNL. Do you feel like you had a unique experience coming into the show with a team of allies already?

Yeah, I definitely felt a massive helping hand going into the show with my best friends. The show is difficult, and hectic, and at times intimidating, so having people by your side who you’ve known for a decent portion of your life alleviates some of that stress. But the whole cast gets along really well. We all try to hang out whenever we can. Since we spend so many hours together writing and preparing the show, we don’t usually kick it on our days off. But when we do it’s the best.

People often label you as “The Lonely Island successors” even though your styles are completely different. Did you ever feel any pressure to make your Digital Shorts more like The Lonely Island’s?

It was pretty obvious when we started making videos that we weren’t The Lonely Island. But I love The Lonely Island and I’m such a big fan of all those shorts. They were an inspiration when we first started, before we were on the show. We don’t make videos like that and nobody’s forcing us to. I wish we could have a huge video like that. Those videos rule.

Do you have a favorite Digital Short of yours that you’re especially proud of? One that you think really represents your work?

A piece we did that a decent amount of people liked that I enjoyed was with Vanessa (Beyer) called “Flirty,” from our first season. Last year a sketch that was cut for time that I liked was “100 Greatest Guys” with James Franco. It didn’t air, but it’s online. That’s one that I like which I don’t think a lot of people are aware of.

Can you tell me about the creative process that goes into writing a Digital Short or a sketch?

Sometimes it just starts with a character or a voice, or just the seed of a funny thing a guy would say and building off of that. And then sometimes we’ll just be riffing in the office and we just start typing up whatever we’re riffing. It usually starts with something small that makes us laugh, and then we try to expand on that.

Someone on Twitter said that there should be a TV show called Kyle Mooney: Cut for Time because so many of your great pieces wind up on SNL’s “Cut-for-Time” channel on YouTube. How does it feel when something you wrote and produced gets cut?

It’s strange, but it’s really just the nature of the show. Any time your sketch is cut, it’s frustrating because you’ve worked on it all week. But fortunately, these things that don’t go to air can exist on the internet, so they do have a life of their own. I almost think it’s helpful if a sketch is cut for time in the sense that it becomes this rarity of sorts, this obscure thing where people say “oh this is a sketch they wouldn’t show on TV.”

Is there any Saturday Night Live alum that you wish you could have been a cast member with?

Any one of them really. Adam Sandler, Mike Myers, Dava Carvey, Eddie Murphy, Will Ferrell, they’re all the best. We’re fortunate because a lot of those people still roll through SNL, and we get to meet them, and it’s awesome.

Speaking of Will Ferrell, how did you get involved with Zoolander 2?

I met with Ben Stiller early last year. I don’t know how I got on his radar exactly, but I think he was aware of some of my videos. We met and I read the script, and we talked about the character, and I made a video for him of how I would perform this character. And then I got the job.

What can you tell me about your character? His name is Don Atari?

The best place to see anything Don Atari related right now is on his Instagram account, @donatari_69. I don’t want to give away too much, but he’s a real “fashion bro.” He’s a “fashion homie.”

Zoolander 2 has a ridiculous cast. What was it like working with with all of those SNL alumni like Will Ferrell and Kristen Wiig?

It was an amazing experience. Everybody was wonderful. It was kind of crazy because I was pretty into the first movie when I was in high school and I remember specifically watching outtakes of Will Ferrell dressed in a little kid’s outfit licking a giant lollipop, that was the funniest thing I’d ever seen. But yeah, working with that cast was insane. It was surreal. It’s one of those things that I never thought would happen.

The second Zoolander is coming out fifteen years after the original. Has the style or humor changed a lot from the first one?

I think they did a great job making a movie that’s not just a repeat version of the first one. It definitely hits moments that you love from the original, but it also has these totally new and weird elements that make it unique itself. I don’t want to give away too much, but they kind of are really smart about how this is a movie coming out fifteen years later.

What are your plans going forward? Are you thinking of doing more movies?

Yeah, I want to make movies. That’s something I really want to do. There’s still work to be done at Saturday Night Live. There’s still stuff we want to get on TV, so we’ll be doing that for a while hopefully.