By one measure, at least. 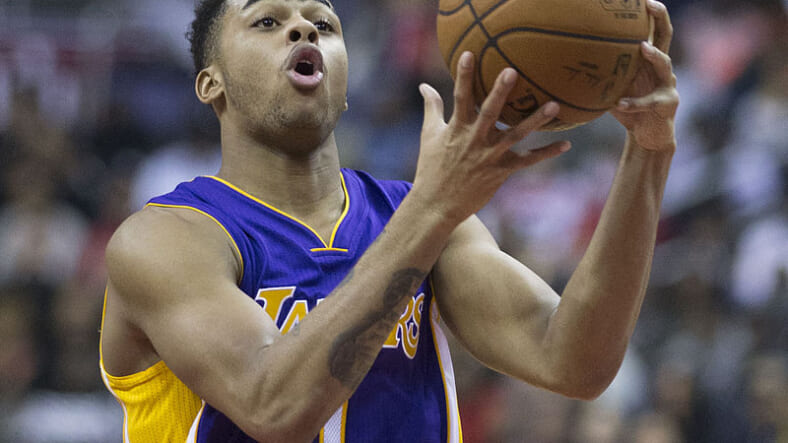 It’s funny to talk about history as it relates to the surprise beatdown the Los Angeles Lakers handed the Warriors yesterday. The Lakers are the NBA’s most iconic franchise, with 16 championships, a gaggle of Hall of Famers and a the NBA’s best creepy old fan. The Warriors, meanwhile, have spent decades milling about the NBA’s cellar.

That’s all changed now. The Warriors are defending champs and, somehow, even better this year. The Lakers are in the midst of an 82-game retirement party for Kobe Bryant. That sets the stage for Sunday’s game that saw a meeting two teams at opposite ends of the NBA standings. The Warriors, at 55-5, carried a .917 winning percentage into the game. The Lakers, at 12-51, sat at .190. Subtract the little one from the big one and you have the biggest differential in winning percentage in any game in NBA history.

So how the hell did the Lakers win? Warriors coach Steve Kerr blamed his team’s lack of energy and credited the boundless young Lakers, whose backcourt of D’Angelo Russell and Jordan Clarkson outscored the Splash Brothers by 13 points. Why would the Dubs have looked so spent on Sunday? Five words: Off night in Los Angeles. If any of the Warriors went to bed before 4am Sunday morning, they would have won by 20.

Still, it would be smart to not read too much into this loss from the Warriors perspective. They’re still on pace to have the best regular season record in NBA history. They still have Steph Curry. And they’re still the favorites to win the title. Flukes happen in sports. This was one of them.

But from a Lakers perspective? Go ahead, read a lot into this game. In a season that has focused so much on the past, Sunday provided a glimpse of the future. Russell and Clarkson are emerging as one of the league’s most exciting backcourts. Second-year forward Julius Randle is a double double machine. The Lakers young core is improving rapidly, but still losing enough to have a shot at a top pick this summer. Right now, that’s the most important thing for the future of this team. So while the win over the Warriors was fun, fans are hoping to see the Lakers lose a lot more over the next few weeks.