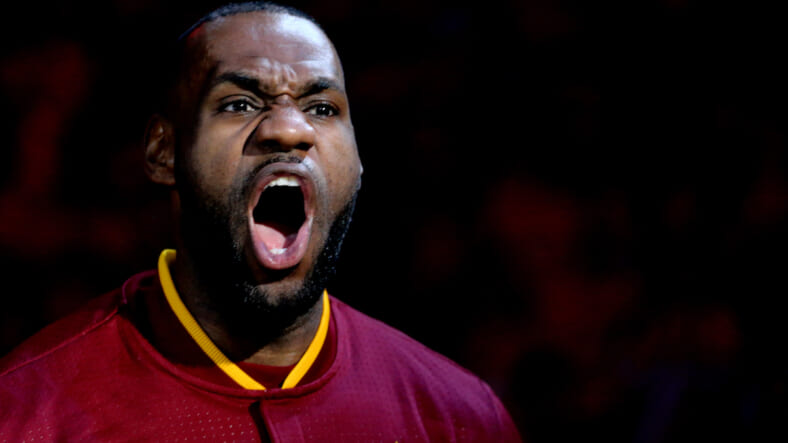 Look at any sports site or—if you’re old—pick up the sports section of the newspaper. As you read about whatever crazy thing Steph Curry just did or Russell Westbrook’s battle with the grizzly bear that destroyed his shirt, you may be reminded of lyric by Eminem: “Motherf**kers act like they forgot about Dre.” Now just replace “Dre” with “LeBron.”

In the past few weeks, the best basketball player of his generation has flown under the radar as his team has trampled the rest of the Eastern Conference. This seems like a good time to issue a reminder to every NBA fan who might have forgotten—LeBron is still damn good at basketball.

That’s been easy to forget in recent weeks thanks partly to his teammates. These aren’t the Cavs of yore, when LeBron was carrying the team all by his lonesome. This Cavs squad has posted a 46 percent playoff shooting percentage on its way to a 10-0 record. They’ve done it with contributions from up and down the roster. Consider this: Even without the 23.5 points-per-game LeBron has put up in the the playoffs, the Cavs still would have won their last two games.

We can’t talk about how good the Cavs have been in the playoffs without talking about their weak-ass opponents. In three series they haven’t played a single top 10 NBA offense. Only the Raptors have a defense that’s any good and they have given up 115 and 108 points in the first two games of the Eastern Conference Finals. It’s little surprising that the Cavs are undefeated, with sweeps of the Pistons and Hawks and a 2-0 lead on the Raps.

Meanwhile, the Western Conference has gotten all the attention. The Warriors’ quest to repeat, plus Curry’s injury, plus Tim Duncan’s final series, plus the Splash Brothers vs. the Fash(ion) Brothers has made everything out West more entertaining. It doesn’t hurt that the games are competitive too. The Warriors, for all their dominance this season, have dropped three playoff games. The Cavs have won all of theirs by an average of 13.4 points. Fans like to see a little bit of drama.

Fans also like Steph Curry. The guy is unreal. On Wednesday he scored 15 points in 1:58. Nine days prior, in his first game back from a knee injury that held him out for two weeks, Curry set the NBA’s overtime scoring record with 17 points in the extra frame. Curry and the Warriors and the series they’re involved in are getting all the attention because they deserve it.

But let’s not forget what lies ahead. Assuming the Warriors make it to the Finals and meet the Cavs, a repeat is not a given. Remember how good LeBron was in the NBA Finals last season? He led every player in the series in points, assists and rebounds per game. LeBron won’t have to do that this year because, unlike last year, Kevin Love and Kyrie Irving won’t be in the infirmary. What LeBron’s performance in 2015  proved is that he can come out and destroy worlds if he has to. The rest of the NBA, especially the Warriors, would do well to not forget that.