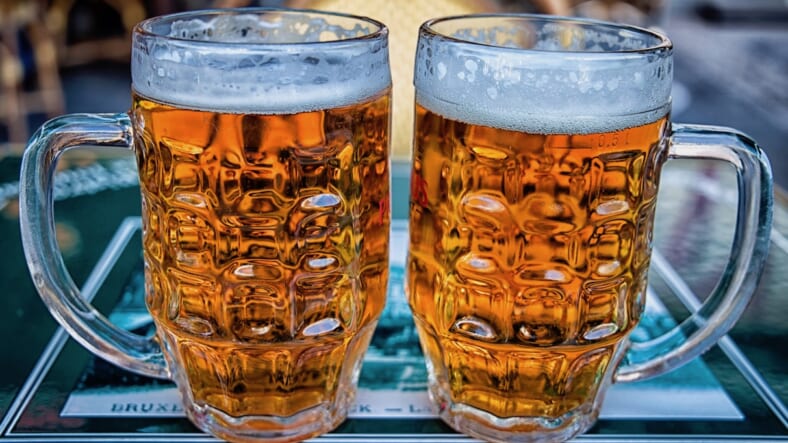 To honor its 150th anniversary, the Wisconsin-based brewery with German lineage has partnered with 400-year-old Munich-based beer haus Hofbräu München for a special-edition lager.

While the amber-colored beer, which boasts a bit of a peppery-spicy kick, has a few modern finishes, it closely adheres to Reinheitsgebot, a brewing law dating back to the 1500s that dictates what can and cannot go into a beer (hint: no pumpkin flavoring).

“The beer boasts American hops and some German malt. While we were able to provide guidance on the spirit of Reinheitsgebot, Leinenkugel’s was still able to bring in their authenticity and modern twists to brewing,” Dr. Michael Möller, the director of Hofbräu München, told us.

“Leinenkugel’s Anniversary Lager is a refreshing Märzen-style lager that’s slightly stronger than some of our other offerings, but it doesn’t look or taste too heavy. The beer and its moderate 5.4% ABV are very inviting,” Leinenkugel’s president, Dick Leinenkugel, said of the collaboration beer.

The resulting amber brew certainly has some bite—a product of the peppery hops and a fuller body, no doubt—but demands to be savored for its clean malt character and lingering toasty sweetness. Remarkably, it still retains a crispness and freshness, suggesting that old German purity law may have some use after all.

“The beer has more than 550 years of combined experience behind it, is brewed in the spirit of Reinheitsgebot and has equal influence from their innovative flavors and our tried-and-trued traditions,” Dr. Möller said.

“We like to think of this as a ‘cheers’ that crosses the Atlantic.”

The Leinenkugel’s Anniversary Lager will arrive on draft at select bars in April and will be available in six-packs in June.