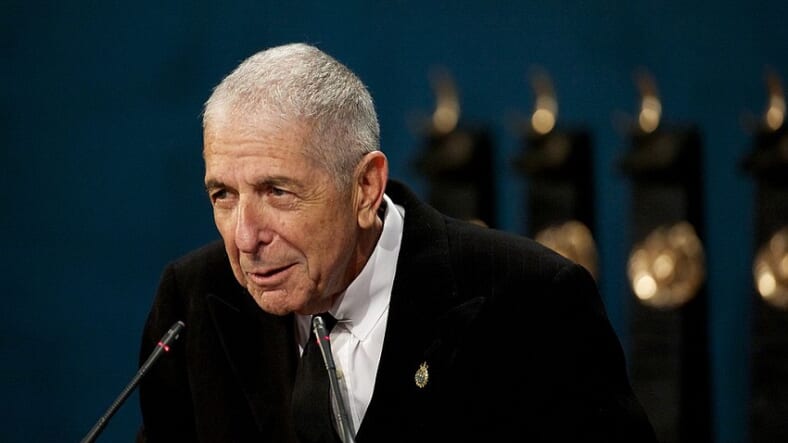 Leonard Cohen, a gravel-voiced songwriter and performer who had a poetic and powerful way with words, has died at 82. Cohen’s death was reported both on his Facebook page and confirmed by his son Adam in a statement given to Rolling Stone.

“My father passed away peacefully at his home in Los Angeles,” wrote Adam Cohen, “with the knowledge that he had completed what he felt was one of his greatest records… He was writing up until his last moments with his unique brand of humor.”

Cohen, Nobel Prize winner Bob Dylan, and Joni Mitchell were three of the most hugely influential singer-songwriters who rose to the top of the music world in the late 60s and never truly faded from the scene. His last album, You Want it Darker, was released just last month.

Cohen was born in Quebec and formed his first music group as a teenager. However he turned to poetry after moving to Greece and published a chapbook, which he followed up with two novels, The Favourite Game and Beautiful Losers. His books didn’t sell well, so he dug back into folk music, which was booming in Greenwich Village in New York in the middle 1960s.

Cohen’s New York connection led to a potent songwriting career and also established him as a performer in his own right—one who toured relentlessly, even well into old age.

Cohen wrote for Judy Collins, James Taylor, and even Willie Nelson, but if there’s one song of his that has absolutely dominated pop music steadily for decades, it is the beyond-iconic “Hallelujah.”

With deceptively simple, often sensual lyrics that weave in bible references, “Hallelujah” really blew up on the American charts after the late Jeff Buckley’s soulful, incredibly well-sung cover reached No. 1 on Billboard‘s Hot Digital Songs chart in 2008. A ton of artists have covered the song to varying effect. Here are a few, beginning with Buckley:

Of course, in spite of “Hallelujah” having become something of a singer’s song, used to show off vocal ability, it may be that no one could quite deliver the song the way Cohen himself could, with his gruff-sounding, unmistakable bass voice.

Leonard Cohen left his fans with one final album, You Want it Darker, released last month. Pitchfork described it as “a pristine, piously crafted last testament, the informed conclusion of a lifetime of inquiry.”

Cohen said in a New Yorker interview published in October that he was “ready to die,” only to later indicate he was being dramatic and that he intended “to live forever.” Many certainly wish he had been able to fulfill that intention. He surely had more to say.