Leo, you earned it. 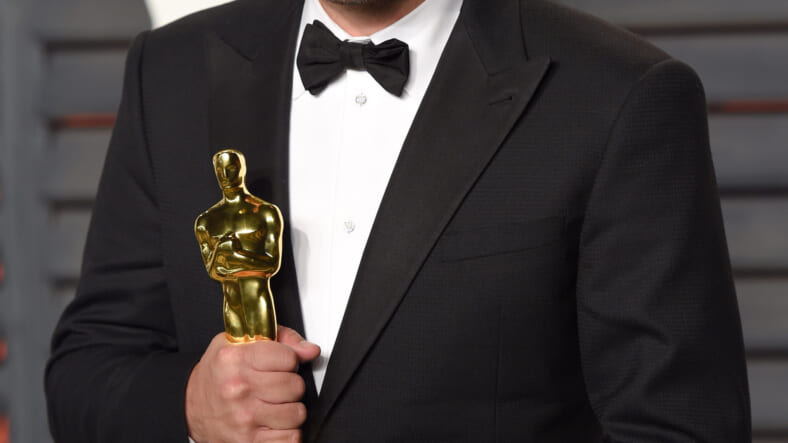 After six nominations by the Academy, Leonardo DiCaprio finally won his first Oscar on Sunday night for his role in The Revenant. And speculation was high about how he’d be celebrating his long-anticipated win. Would he get his vape on? Party hard with the Pussy Posse? Leave the after-after-after party with 20 supermodels? Here’s what reports say actually went down.First, according to the Daily Mail, he hit up the Governors Ball at the Dolby theater where he took a selfie with Stephen Spielberg and was reportedly heard yelling “where’s my mom?” when he first arrived….as one does. (His mom Irmelin was his date to this year’s ceremony.) Leo was also supposedly heard saying “I’m so hungry” and eating chicken pizza, which is pretty close to what the rest of us were doing…only we were in sweats, on our couches, and not multi-millionaire Oscar winners. Here’s a clip of him getting his Oscar engraved:

.@LeoDiCaprio gets his Oscar engraved at the Governors Ball: “Do you do this every year? I wouldn't know.” #Oscarshttps://t.co/3dBRsS1FQ4

After Governors Ball, he hit up the famous Vanity Fair after-party, where he hung out with Chris Rock, Elton John, Ben Affleck, before leaving to catch a late-night meal at Ago with his friends. If anything, it sounds like an uncharacteristically chill night. But TMZ also caught glimpse of him vaping, so it’s nice to see that there are still some things we can count on in this crazy world.