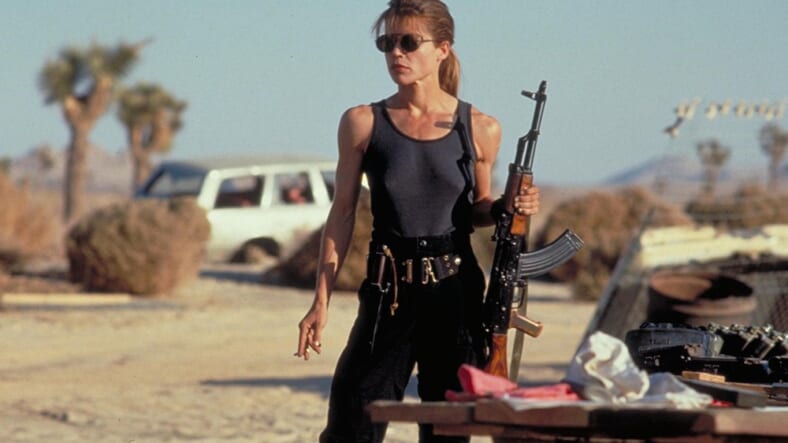 Linda Hamilton, who broke ground as one of the first female heroines of a major action franchise, will return to her iconic role—down-and-out waitress turned android slayer Sarah Connor from Terminator.

James Cameron made the announcement while speaking at a private event about his forthcoming Terminator installment, which will pick up where Judgment Day left off.

So just pretend Rise of the Machines, Salvation and Genisys never happened.

“As meaningful as she was to gender and action stars everywhere back then, it’s going to make a huge statement to have that seasoned warrior that she’s become return.”

“There are 50-year-old, 60-year-old guys out there killing bad guys, but there isn’t an example of that for women,” Cameron added.

It will be over 25 years since Hamilton last played Conner, in Cameron’s wildly successful sequel T2. She first played the role back in 1984, when Terminator was nothing but a low-budget action flick starring a little-known Austrian bodybuilder.

Expect a new warrioress to join her ranks. Cameron said he’s still on the lookout for a younger protege, but don’t expect her to upstage the great Sarah Conner.

“We’re starting a search for an 18-something woman to be the new centerpiece of the new story,” Cameron said.

“We still fold time. We will have characters from the future and the present. There will be mostly new characters, but we’ll have Arnold and Linda’s characters to anchor it.”

There’s still no word as to when this miraculous sixth Terminator entry, which will be directed by Deadpool‘s Tim Miller, will be released, but Cameron has teased he’s shooting for a new trilogy.