Watch The Chilling Trailer For Horror Movie ‘Look Away’ 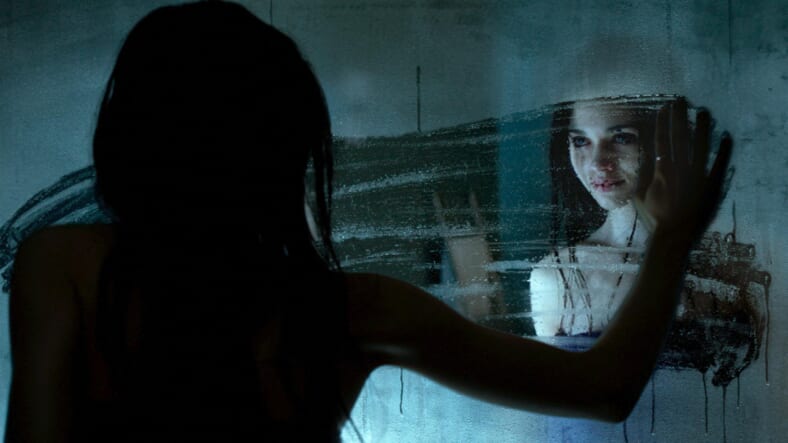 The horror genre is notorious for releasing fantastical films which deviate wildly from realistic notions and attain their shock factor through their extremism. Due to this conventional device, most horror fans have become habituated to pure thrills of entertainment that needn’t not be taken too seriously or given any real afterthought.

The new horror movie Look Away by writer/director Assaf Bernstein stands out as a marked exception to this rule of thumb.

Premiering in select theaters and on iTunes this Friday, Look Away earns its hair-raising tension not through wild departures from realism, but, in contrast, from an uncanny verisimilitude that we can all relate to on some level.

The film explores the stifling repression of an isolated teenage girl named Maria (played by India Eisley) and the internal vicissitudes she faces when her inner twin, Ariam, is manifested and meets her head on through the mirror to help her take command of her life.

It is this internal struggle, brought viciously yet naturally to life in Look Away, that hits an empathetic cord and makes the film so stirring.

As Jason Issacs (who plays Maria’s plastic surgeon father, Dan) elaborates, “It’s that part of all of us that we live with all day every day where we think, finally, ‘I can say this thing to that person. Why don’t I just take that and smash it on his head.'”

Under the control of this inner force which knows no social contract, a liberating and enthralling new realm of action, sexuality, and fantasy are manifested. So much to the extent that Facebook has blocked some of the film’s content due to its suggestive nature.

This willingness to go outside the box and create a world of deviance that, while fantasy, is not too far of a stretch from what many of us feel inside (especially during our teen years), is the reason Look Away is finding real resonance and is shaping up to be one of the year’s most compelling thrillers.

Look Away will be released in select theaters on Friday, October 12. Watch it on iTunes here.