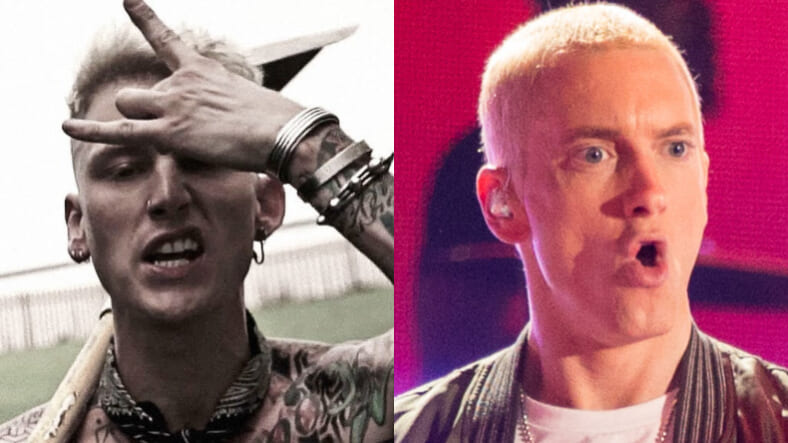 On Instagram, MGK donned a shirt embroidered with “Killshot” album art and flipped the bird while standing in front of the crowd at a Fall Out Boy stadium show.

Kelly captioned the photo “he missed” along with the goat, devil and knife emojis on Twitter.

“The reason that I dissed him is because he got on—first what he said ‘I’m the greatest rapper alive since my favorite rapper banned me from Shade 45’ or whatever he said, right? Like I’m trying to hinder his career,” Eminem said.

“I don’t give a fuck about your career. You think I actually fucking think about you? You know how many fucking rappers are better than you? You’re not even in the fucking conversation.”

In the last segment, released Friday, Eminem revealed that Drake was NOT one of the rival rappers he targeted on his latest album despite lyrics that many interpreted as an insult directed at the Canadian hip hop act.

Here’s the line in question from “Lucky You.”

“And I like Drake, ” he continued. “What I’m telling you with these lines is, I don’t know what’s real and what’s not, at this point.

“Because you hear shit about this rapper, that rapper, whatever. I’m telling you that I don’t do it. Never have and never will. If I ever need a ghostwriter, I need to just fucking put the mic down.”

“[Drake] makes great music,” he added. It’s not really anything you can say about it”.

As for his beef with MGK, Em probably might decide not to give him any more free press. He even says “I’m only doing this once” in the intro to “Killshot.”

Many have already crowned Eminem the victor. What do you think?