But Yelp is onto them. 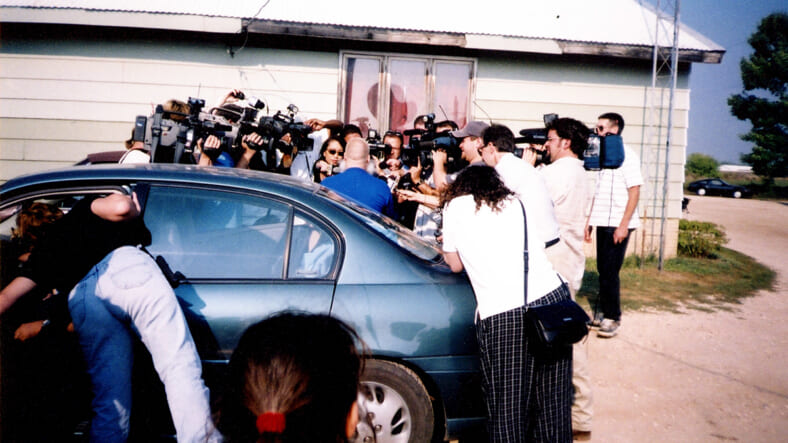 It may not be rational, but it sure is satisfying: The Yelp page of Making A Murderer villain Ken Kratz has become a venting ground for the many angry viewers who believe Kratz, a former prosecutor, is complicit in a gross miscarriage of justice that put Steven Avery behind bars for a second time and sentenced his teenage nephew, Brendan Dassey, to a decades-long stay in prison.

Since the documentary series premiered on Netflix earlier this month, Kratz Law Firm has seen a sharp increase in activity, almost entirely from Making a Murderer viewers who not only blame Kratz for Avery’s conviction, but who are disgusted by a sexting scandal which uncovered inappropriate text messages Kratz sent to a female client — a survivor of domestic abuse, no less. (Kratz has sought treatment for sex addiction and substance abuse.)

Kratz’s firm currently has a 1.5 star ratings, thanks to reviews like this:

“…if you want a crooked republican dirtbag lawyer, hire this person,” said Bobby K. from San Lorenzo, California. Or Jordan J., from Portland, Oregon, who said: “You are a piece of shit and should do the world a favor and waddle your fat ass into oncoming traffic you waste of life.”

Yelp has caught on to the review-skewing, and currently has a pop-up advisory on the law firm’s page, warning potential reviewers that Yelp may “remove both positive and negative posts that appear to be motivated more by the news coverage itself than the reviewer’s personal consumer experience with the business.”

Some particularly wily reviewers appear to be attempting to circumvent the scrub by giving Kratz Law Firm five stars but telling us how they really feel in the comments.

“Mr. Kratz, as an intelligent, educated woman I can only assume you would choose not to legally represent me if needed,” wrote Melissa M. from Canton, Massachusetts. “Let me first thank the sweet baby Jesus for that as I feel if I were even within 100 miles of your physical presence, your disgusting, corrupt, vile and putrid ways would cause me not only to be physically sick but also my blood to actually boil. Even Satan himself would not accept you through the fiery gates of hell. You’re a real special kind of sociopath, you POS.”

Kratz has accused Making a Murderer filmmakers Laura Ricciardi and Moira Demos of presenting a slanted story that was unfairly biased against the prosecution, and claims that he was not given an opportunity to participate in the film (something the filmmakers deny).

“I believe there to be 80 to 90 percent of the physical evidence, the forensic evidence, that ties Steven Avery to this murder never to have been presented in this documentary,” Kratz told Fox News.

Both Avery and Dassey remain behind bars. And it’s worth noting that Kratz is now working as a criminal defense lawyer.