Hey, at least we won’t have to watch him fight Floyd Mayweather again. 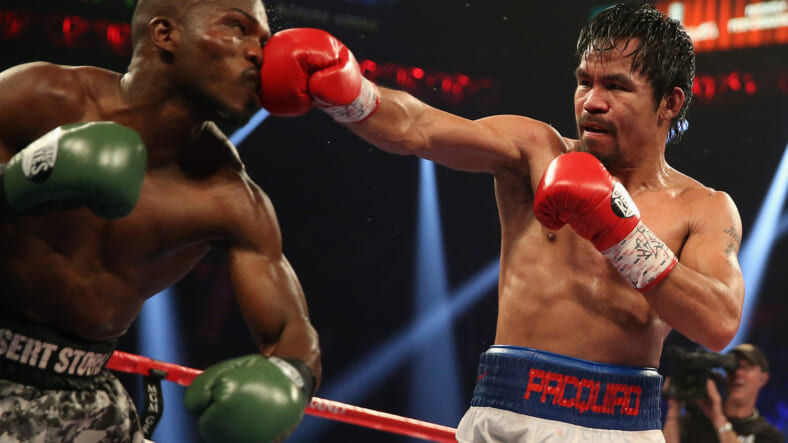 Manny Pacquiao will face Tim Bradley for a third time on April 9th at the MGM Grand in Las Vegas in what could be Pacquiao’s final fight before he retires to pursue his political career in the Philippines.

Pacquiao (57-6-2, 38 KO), boxing’s only eight-division champion and a Filipino congressman who is running for senate, last fought on May 2, when he was slickly outboxed by Floyd Mayweather in the highest-grossing fight in history.

While Mayweather’s decision victory was derided as a drama-free dud, news that Pacquiao would fight Bradley yet again on HBO pay-per-view was met with more bellyaching by fans, including Sports Illustrated scribe Chris Mannix.

Few cared about a second Pacquiao-Bradley fight. Fewer will care about the third. Disappointed MP didn't go for the toughest test: Crawford.

Bradley (33-1-1, 13 KO) claimed a widely ridiculed split-decision over Pacquiao in 2012 that pretty much everyone agreed Pacquiao won. In the 2014 rematch, Pacquiao punched his way to a lopsided decision victory. So essentially, Pacquiao is a dominant 2-0 coming into the third fight.

But this being boxing, Pacquiao’s promoter Bob Arum is trying to drum up interest by declaring that the third bout will be a must-see, even if the first two weren’t particularly competitive.

That’s because the rugged Bradley has shown signs of improvement under the tutelage of his colorful new trainer, TV commentator Teddy Atlas, who pumped up his fighter with this epic “We are Firemen” rant before Bradley’s ninth-round knockout of Brandon Rios in November.

“This is a different Timothy Bradley under the aegis of Teddy Atlas,” Arum told ESPN. “This is not me just saying that. The Bradley that fought Rios, whatever you thought about Rios, was a different fighter. It’s still Bradley, but a new Bradley with Teddy. And at this point of his career, can Manny handle that? Remember, Manny is also coming off an injury.”

Pacquiao, 37, had surgery to repair a torn right rotator cuff following his lackluster loss to Mayweather, which sold a record 4.6 million PPV sales and generated more than $600 million.

Before Pacquiao-Bradley III was announced on Wednesday, the two other leading Pacquiao opponents were dangerous junior welterweight titleist Terence Crawford and welterweight contender Amir Khan, who was also in the running to be the currently retired Mayweather’s final victim before Andre Berto got the gig.

Despite earlier statements to the contrary, Arum told ESPN this may not be Pacquiao’s final appearance in the ring.

Yikes. Maybe we’ll have to suffer through that Mayweather rematch after all.