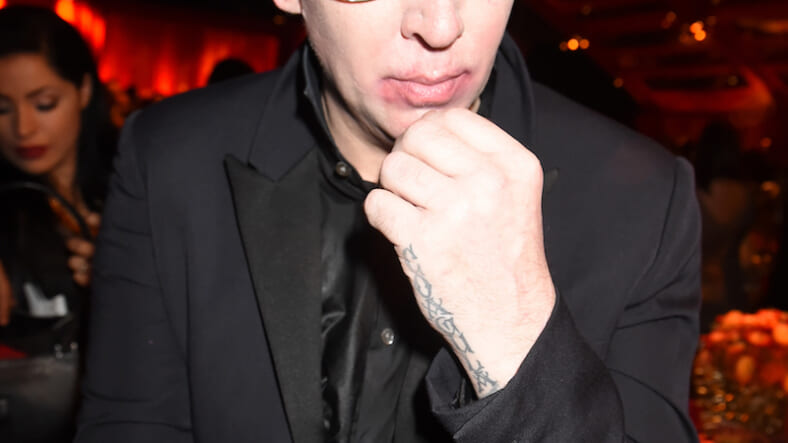 Turns out that Canadian gentlemen don’t take too kindly to having people call their girlfriends the b-word, even if the person doing said calling happens to be a famous musician. Marilyn Manson learned this the hard way after getting punched out at a Denny’s in Canada. And why was he at a Denny’s in Canada, you ask? Shit man, even aged goth-rockers can’t resist a Grand Slam paired with a bottomless cup of coffee.

Apparently Manson’s tour supporting his latest release The Pale Emperor swung through Lethbridge, Alberta and following the show he and his entourage dined out on the town at the fanciest place they could think of at two in the morning … Denny’s. For whatever reason, he found himself in an argument with a couple at a nearby table and things escalated to such a degree that he lashed out at a woman and called her a bitch, and was then promptly punched in the nose by her boyfriend. According to TMZ, Manson claims that he never instigated the fight, and didn’t call anyone a bitch. Here’s the full statement from his manager via TMZ:

“Manson’s manager tells TMZ the rocker was enjoying his late night meal when two girls approached him and asked for a photo. Manson says he obliged and never called either woman a ‘bitch’..as witnesses have claimed. Marilyn says the guy came out of nowhere and hit him in the face. Manson says his security grabbed the guy, who then began screaming about blowing up Manson’s next concert. Manson also claims the attacker elbowed his makeup artist in her face. He says they’re both going back to cops in Alberta to press charges.”

I guess we’ll never know what really went down in the wee hours of the morn at that ill-fated Denny’s but one thing’s for certain: Manson won’t need makeup to make black circles around his eyes for quite some time. Because a guy in Canada did it for him.