“I didn’t realize Zima was making a comeback. That’s unfortunate.” 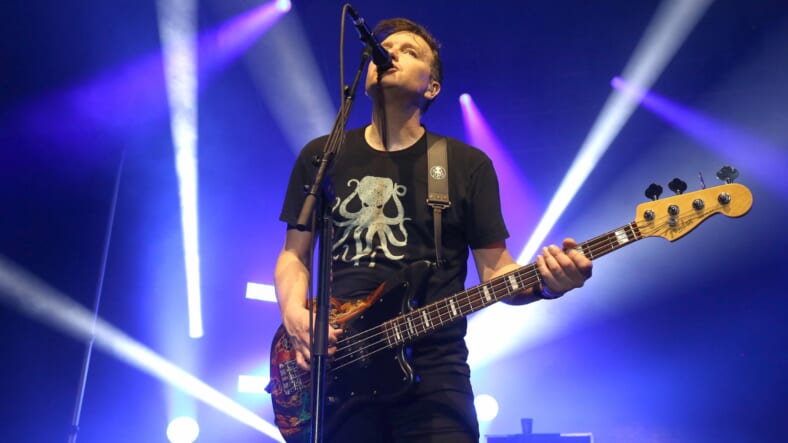 Blink-182 may be without the instantly identifiable voice of the California punk band’s co-founder Tom Delonge for the first time, but they’re sure as hell not about to slow down.

With a deluxe edition of the band’s latest effort, California, due out May 19, the trio is staying plenty busy in the midst of a chaotic multi-continent tour that includes Download Festival, and Lollapalooza.

This Sunday, the guys will be closing out the three-day NCAA March Madness Music Festival in Phoenix, Arizona alongside Aerosmith and Macklemore. You can stream it live for free at ncaa.com.

We caught up with bassist and singer Mark Hoppus before the band played a gig in Las Cruces, New Mexico, to get his opinion on the return of ’90s pop culture, the backstory behind the insanely sexy remake of the “What’s My Age Again ” video, and Tom Delonge’s love of aliens.

It seems like everything ’90s is making a huge comeback right now, and Blink-182 was definitely a part of that decade’s pop culture. How have you guys managed to stay popular for so long?

For us as a band, we’ve always just kept out head down and written music that we’re proud of and means something to us. When we first started off, we were not popular. Success kind of came to us, we didn’t have to really change what we did. And that’s how we still approach it. We do best when we don’t really second-guess ourselves, and just write stuff that means something to us.

Two ’90s products coming back are JNCO jeans and that god-awful Zima drink. Between those two, which is more offensive to you personally?

I didn’t realize Zima was making a comeback. That’s unfortunate. That’s not one of the better things from the ’90s to come back. Definitely Zima.

What ’90s trend or product do you think deserves a comeback?

I like that vinyl is coming back so much. I like the collectability of things, especially when it comes to music. So much time and thought goes into things like the artwork, and you kind of lose that in the digital age. And it’s nice to be able to actually hold something in your hand.

Of big ’90s bands with numbers in their names, like Sum 41 and 311, which is your least favorite?

I’m friends with all those guys, so I wouldn’t say I have a least favorite. We’ve gotten to tour with all of them, and all of them are really cool guys.

What about 3 Doors Down?

I don’t know them personally, and I don’t listen to their music. So I would put them at the bottom of the list.

We loved the remake of the “What’s My Age Again” video you guys did for “She’s Out of Her Mind” with Lele Pons, Hannah Stocking and Vale Genta. What made you guys want to remake it?

Travis had the idea that would we do a video, but instead of us it would be supermodels. Somehow, we started pitching ideas around and we thought, “What if we could do the ‘What’s My Age Again’ video,” and that’s what stuck. It was Travis’ idea initially, though.

The original features you guys running naked through the streets of L.A., and is now pretty iconic. Are there any stories from filming that you can reveal?

The idea for the original came from the director Marcos Siega. The day of the shoot, we’re standing in bath robes on 3rd Street in Los Angeles, and it’s early in the morning. We were all like, “What have we done to ourselves? Are we really going to do this?” And we were just about to film the first shot, and someone drove by and screamed, “You assholes!” Then we started.

Did that make you want to film it even more?

You guys released California last year, and a deluxe edition is slated to come out in May. What can fans look forward to about the deluxe edition?

Originally, we were going to go back in and touch up some of the songs we hadn’t finished. We originally were going to have three to five songs on the deluxe, then we got into the studio and thought we could write some more songs. We ended up writing a bunch more so there 11 total on it. They’re all songs we love, it’s really a double-album.

This is the first album Blink-182 has put out without Tom Delonge. Are you guys still on good terms?

I’ve spoken with him a couple times. I have nothing but the highest regard for Tom and wish him the best in everything that he does.

Speaking of Tom, the dude seems to be pretty big in to extra terrestrial life and aliens. Where did this passion, or should we say obsession, come from?

I don’t know, but he’s always been really in to aliens and conspiracy theories. It’s always been something that’s very important to him and he’s always pursued. He does a lot of research and gathers a bunch of information, and he would talk about it all the time.

Got anything else you want Maxim readers to know about?