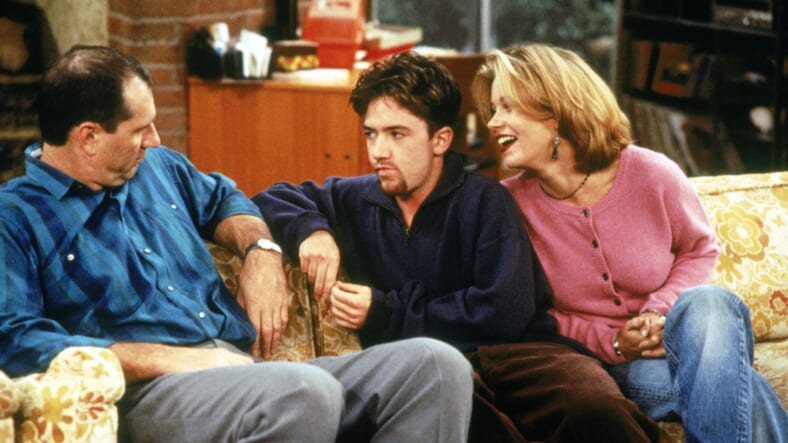 Reboot fatigue be damned: We’re all on board for an updated Married With Children. And so, apparently, is the former cast, including David Faustino, who would be the main focus of a new series as an all-grown-up Bud Bundy. So what’s the holdup?

“There has been one issue, a legal issue, that they haven’t been able to get around at the moment that they’re still trying to work out, which we obviously hope they’ll work out, as do the fans,” Faustino said during a recent appearance on the Allegedly podcast. “But if it does, you’ll see it and if they can’t figure it out, then you won’t.”

Very cryptic indeed. Faustino doesn’t give any further details, leaving us all to speculate wildly. Perhaps it has to do with who will carry the show: Apparently, the producers would like to see it land at Netflix, and maybe Fox owns the lifetime rights and doesn’t want to give them up? (Remember, Arrested Development was great until it went to Netflix where it had its unequivocally worse season.)

Or maybe there’s a contractual issue with Ed O’Neill, who currently stars on Modern Family? (Seriously: Have any of the Modern Family actors appeared on another TV show since the sitcom premiered in 2009? Broadway, yes; movies, yes; commercials, very much yes; but another TV series? Don’t think so — it’s pretty rare for an actor to be a regular on two series at the same time, especially on competing networks.)

Anyway, we could be way off here. Whatever the legal hurdle is, we hope they can work it out — it would be great to have a new, edgier Married With Children that didn’t rely so heavily on ragging on “fat people and women,” as Faustino said in the podcast.

“I think in ways it did push the envelope, but in ways, we’ve become less—some of the jokes we couldn’t get away with today. You could not get away with a lot of the s–t that they said,” he continued. “I think the things that would be different—like Kelly would be in a G-string. You can get away with stuff like that.”