Matt Damon Talks Training for Bourne, ‘Team America’, and His Toughest Role Ever

The ‘Jason Bourne’ star answered all in a new Reddit Q&A. 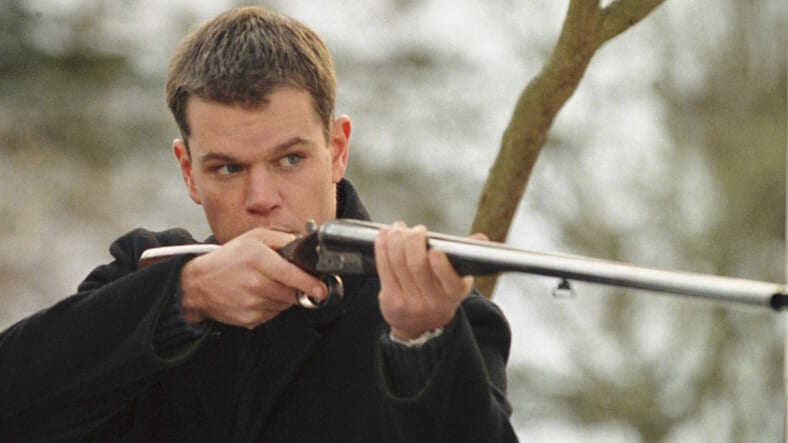 As he gears up for the latest Bourne installment, the last thing you’d expect from Matt Damon is for him to be browsing Reddit. Nonetheless, the action star recently took time off the press circuit to answer some burning questions on the social-networking service.

Below, read some highlights, where Damon sounds off on getting into fighting shape for the Bourne movies, his thoughts on that Team America caricature, whether he would lend his voice to a video game, and, this being Reddit, what Julia Stiles smells like.

Corydoran: Are there any skills or trades that you learned while preparing for your early roles that you can still do well today?

The thing about acting is often time what happens is you end up being a jack of all trades and a master of none. So I’ve had to learn things for the Bourne films for instance, like being upside down underwater in a car which required me to learn. I went to a swimming pool in Berlin everyday after work and practiced being at the bottom with a scuba tank, getting my air taken away, and tying shoes and doing small menial activities without my air in order to be comfortable underwater so I could shoot that scene. I didn’t walk away being certified as a scuba diver which would probably be a better use of my time, but I walked away being able to be in a car underwater and perform the scene I needed to performed, so it’s an odd set of skills you end up learning. Though I did for the Bourne movies start boxing and I never did that before, I was 29 and I fell in love with doing it. I never did it as a sport. I wouldn’t put me as a ring against anyone. I’m an excellent movie fighter, probably wouldn’t be in a real fight.

First day of principal photography complete and happy to report, BOURNE is back! #Bourne2016 pic.twitter.com/ncIILnGKWr

Cant-Find-Username: Were you reluctant to do a fourth or was it an easy decision?

It was an easy decision. Once Paul Greengrass said he wanted to do it, I was in, but we didn’t have a story. I mean it was nine years in the making because we didn’t want to force it if it wasn’t there, and so once we realized it was there we all jumped on board, but before that it was an agonizing process as we tried to figure out if there even was a story to tell.

rv49er: Are you looking forward to passing $1 trillion spent on saving you in movies?So that article was sent to me. I might be the first person for whom a trillion movie dollars was spent to rescue, so obviously that will be a milestone, and I am actively looking for projects that could cost people money trying to come get me.

Reminder that it would cost like a combined trillion dollars to rescue Matt Damon in all of his movies https://t.co/fv7pomT15S

Dreamcode: What’s the most challenging role you’ve ever had?I think the most challenging role that I’ve ever had, was when I did Courage Under Fire, and I had to lose all the weight that I lost on my own, that was the most physically challenging did I’ve ever had to do in my life. I weigh probably 190 pounds right now, and I weighed 139 in that movie, and that is not a natural weight for me and not a happy weight for me even when I was 25. So you know to do that I had to run about 13 miles a day which wasn’t even the hard part. The hard part was the diet, all I ate was chicken breast. It’s not like I had a chef or anything, I just made it up and did what I thought I had to do. I just made it up and that was incredibly challenging.

SCFack: What was your first thought when told about your “involvement” in Team America?I was always kind of bewildered by Team America, I think because it’s hard for us to understand what our images are in public, I think we’re not good judges of that, and when I saw myself on screen just only able to say my own name and not really that well, I kind of wondered “Wow, is that how people perceive me?” At that point I just kind of was like, I’m a screenwriter and an actor, and like really? I can barely say my own name? So I was always bewildered by that, and I never talked to Trey and Matt about that. And Incidentally, I believe those two are geniuses, and I don’t use that word lightly. I think they are absolute geniuses, and what they’ve done is awesome and I’m a big fan of theirs, but I never quite understood that one. But I will say this. Those of us who were parodied in that video were parodied because we were against the Iraq war, and we went on the record against that war, and so history is on my side not theirs.

AtotheJ2215: Would you ever consider teaming up with Ben Affleck again to write an original screenplay?Good Will Hunting obviously is the most influential movie in my life, and in Ben’s life, and bringing it to the screen kind of dominated our 20s. It took 5 years to get it from the time we started to the time it came out, it took 5 years. So I would love to write another script with Ben; I love Ben, I love his work, he’s been my buddy for 35 years. The big issue is time for us. We have a company together so we work on a lot of projects together, but to try to carve out the time is really tough. I mean we both have a whole mess of kids now, and these other days jobs. He’s directing all the time and I’m off working with these other directors. The thing about Good Will Hunting is that we were unemployed and we weren’t writing the script on a deadline either. Nobody was expecting it, so we were just these two idiots in our basement writing this thing, and now we have all of these pressures of the lives grownups have. So I would never say never because I would absolutely love to write with Ben again, and I’d love to collaborate with him on anything, he’s brilliant. I’d love to be in one of his movies that he directs. The problem there is that he just keeps giving himself the best roles, so until he stops doing that and maybe just directs, none of us can really work with him.

rck_james_bitch: Who would win a battle to death, you or Ben Affleck?I think the answer to that is clear and I’ll let you fill in the blanks.

TheIronGiants: I’m curious, do you have any interest in video games? Have you ever considered working with video games as a voice actor/motion capture?I’ve never been approached to do that, I’d totally be into it. I’m really interested to see where entertainment heads as these video games, the graphic are getting so good, and VR is getting so good, and you know, what’s going to happen to movies? What are the implications for movies, and does this morph into a new kind of story telling, and what is that, and can I be a part of it? You know, ultimately those of us who make movies are storytellers and we want to gather you around and tell you stories. If gaming is the way to do that I’m all for looking into it, but nobody has asked me as of yet.

Catch Matt Damon back in action in Jason Bourne, out July 19.