A rematch is reportedly “more likely than not.” Here’s what we know. 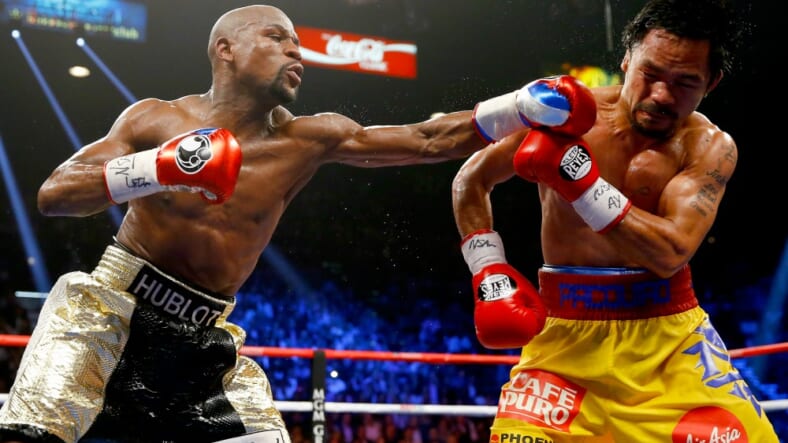 Floyd Mayweather retired from boxing last year. Manny Pacquiao, who’s running for Senate in the Philippines, recently joined him. And yet, here we are, staring at the distinct possibility of a second fight between the two most famous boxers in the world.

“It’s close to 50-50 but probably leaning more toward the fight happening…more likely than not,” promoter Bob Arum told TMZ Sports on Wednesday.

While Arum admitted that he hasn’t talked to either fighter about the possibility of a rematch, the promoter claims that that if one of them agrees to do it, there’s little chance the other won’t jump in the ring too.

Arum’s comments come on the heels of Floyd Mayweather Sr., the fighter’s father and trainer, telling the Los Angeles Times, “I’m not going to say Floyd won’t fight again.” Smells like a rematch to us.

Part of the motivation for each boxer coming out of retirement would be the enormous checks they’d cash after the fight. After their first fight last May, Mayweather went home with around $220 million, leaving a paltry $150 million for Pacquiao. Even though that fight was considered a snoozer by everyone who plunked down $100 to watch it, there’s little doubt that a rematch would bring in comparable viewership — and, for boxing promoters, a flood of cash.

There’s some small hope that if a rematch does happen, it won’t be a total dud. Pacquiao, fully recovered from the shoulder injury that hampered him in the Mayweather fight, showed he’s still got some power left in those punches when he defeated Timothy Bradley on April 9th. After the fight, Bradley said Pacquiao still has “lethal power in that left hand.” Lethal enough to avenge his loss to Mayweather? We’ll find out soon enough.