The 8 Craziest Things Said At The McGregor vs. Diaz Press Conference

These guys are ready to throw down. 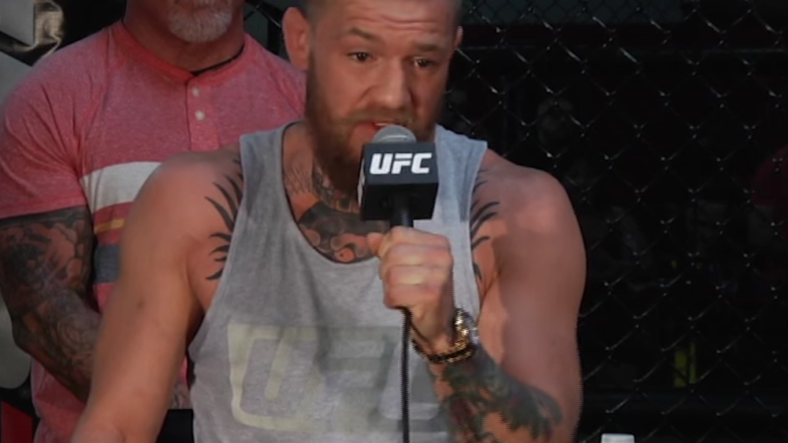 Less than 24 hours after the announcement that Nate Diaz would step in for the injured Rafael dos Anjos and fight Conor McGregor at UFC 196, the two fighters were rushed onto a stage in L.A. to bark insults at each other. And they did not disappoint.

As expected, McGregor was the more silver-tonged of the two. Among Diaz’s comebacks to the UFC’s most notorious trash talker was this series of badass bon mots: “Fuck you. Fuck your belt. I don’t give a fuck what you say, motherfucker.”

Still, Diaz brought the heat when it counted and provided the craziest accusation in a presser full of madness: “Everybody does steroids. The whole UFC. Everybody,” he said. McGregor shot back, “I’m not on no steroids. What the fuck are you talking about?”

Here are seven more nutty lines from the two men who very clearly hate each other.

McGregor on Diaz: “He’s like a little cholo gangsta from the hood, and at the same time he coaches kids’ jiu-jitsu on a Sunday morning and goes on bike rides with the elderly. He makes gun signs with the right hand and animal balloons with the left hand.”

Diaz on McGregor’s opponents: “You fight midgets. Knocked out three midgets and you’re pumped up.”

McGregor on the last time he tried to fight Diaz at UFC 189:  “I felt pity on your broke ass. I wanted to make you rich at 189, but they gave me Mendes.”

Diaz on his motivation: “I train to kill.”

McGregor on Diaz’s confusing physique: “I’m about to knock out a stuffed, fat ass, skinny Mexican.”