Mel Brooks confirmed he’s in talks to bring back the greatest sci-fi parody in the galaxy. 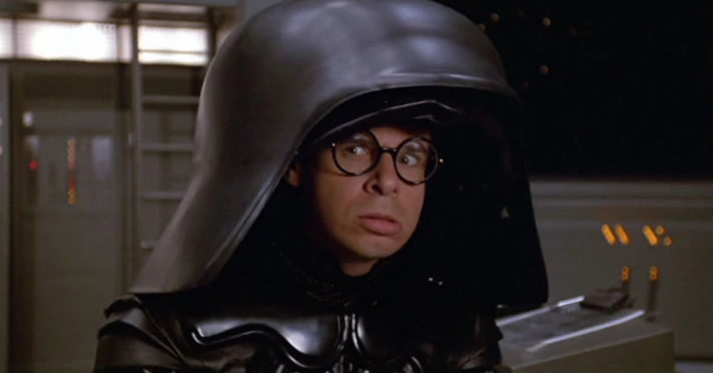 We don’t think it’ll be titled Spaceballs 2: The Search for More Money, but there’s a not-so-ludicrous chance that Mel Brooks‘ epic Star Wars parody will be getting a sequel over 30 years after the original film brought the power of the Schwartz into theaters.

While hosting a screening of another of his classic parodies, Young Frankenstein, Brooks was asked by an audience member about the possibility of a Spaceballs sequel. Here’s what he had to say:

So… will there be a Spaceballs 2?! #MelBrooks says… pic.twitter.com/Ei89hTJLD7

“MGM is slightly interested in doing it because of Star Wars Rogue One and The Force Awakens and the new Star Wars explosion,” he responded to cheers from the audience. “So they think maybe, so we’re talking, who knows.”

Spaceballs, released in 1987, used the premise of an evil empire bent on stealing oxygen from an innocent planet as the pretense for wall-to-wall gags making fun of Star Wars, sci-fi films, and cinematic conventions in general. It starred Bill Pullman as a Han Solo-like mercenary who rescues a spoiled princess (Daphne Zuniga) and her Joan Rivers-voiced droid with the help of his half-man/half-dog pal named Barf (John Candy). Rick Moranis and Mel Brooks rounded out the cast as the evil leaders of the “Spaceballs.” Got all that?

We couldn’t be more excited about the possibility, especially considering the fact that Maxim once named this scene from the original film as “the greatest gag in cinematic history.”

May the Schwartz be with the studio heads to make this happen!