He definitely wasn’t the only one. 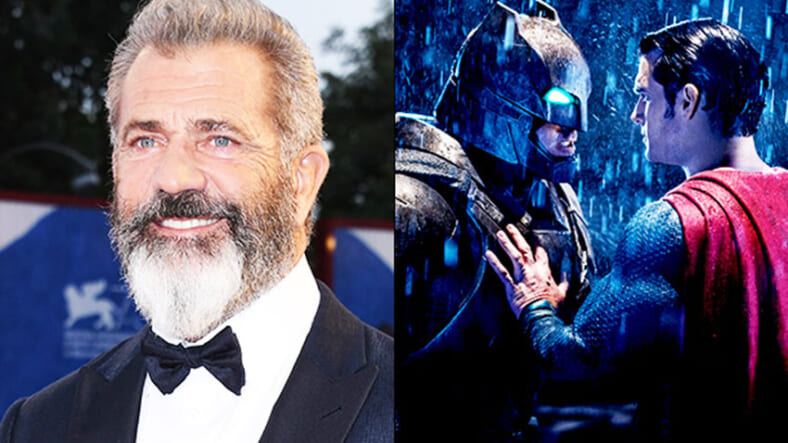 Mel Gibson is currently promoting what is by many accounts a successful return to the director’s chair with his World War II actioner, Hacksaw Ridge. In an interview with Deadline, however, Gibson was his old cantankerous self.

While Gibson spoke with compassion about the plight of war veterans and about Desmond Doss, the hero played by Andrew Garfield in Hacksaw Ridge, he also didn’t hesitate to take some shots at one of the summer’s biggest—and perhaps most poorly-reviewed—blockbusters, Batman v Superman: Dawn of Justice.

Discussing summer tentpole movies with Deadline in general, Gibson questioned whether such films really needed $200 million budgets. “I think there’s a lot of waste,” he told Deadline, “but maybe if I did one of those things with the green screens I’d find out different. I don’t know.” Then in the following exchange, Gibson thoroughly called out the DC film:

DEADLINE: If you hit, the rewards can be enormous, but you’ve got to make a lot of money to just break even.GIBSON: That’s the game, isn’t it?DEADLINE: Is it a good game though?GIBSON: Wow, I mean if you’re spending outrageous amounts of money, $180 million or more, I don’t know how you make it back after the tax man gets you, and after you give half to the exhibitors. What did they spend on Batman V Superman that they’re admitting to?DEADLINE: I want to say $250 million. Then you’ve got marketing.GIBSON: And it’s a piece of sh*t.

Ouch. Gibson doubled down a little later in the interview by sneering at comic-based stories in general, telling Deadline, “Do you know what the difference between real superheroes and comic book superheroes is? Real superheroes didn’t wear spandex. So I don’t know. Spandex must cost a lot.”

So if people keep asking if Mel Gibson is back, we have an answer. Yes, he’s back, and it’s pretty great to see him doing his thing on film, behind the camera, and in interviews again.