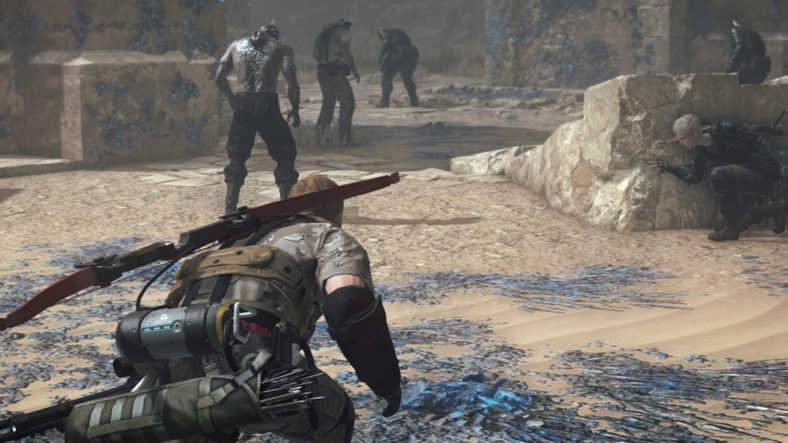 Whether you’re a stealth player or prefer to go in guns-blazing, there’s a game for you this week. Here are our top picks for digital dominance.

Borrowing the engine from the 2015 blockbuster stealth game Metal Gear Solid 5: The Phantom Pain, Konami’s latest Metal Gear game is also the first one without the famous Hideo Kojima at the helm. Metal Gear Survive has the look and feel of MGS5, but flips the paradigm by switching from the open-world tactical gameplay to a stealth-focused horde mode where scavenging and rationing become an essential part of your success.

With the purpose of surviving (it’s not just a clever title) wave after wave of zombie-like creatures, you’ll play as a lone soldier and rely on crafting useful gear from scavenged items. To keep things interesting, Konami has also included a co-op mode so you can take on the challenges in MG Survive with friends as well as rolling challenge missions to give players a reason to continue coming back.

Unlike the Hitman games that proclaim the necessity for stealth but inevitably turn into a shootout, Metal Gear Survive truly requires you to stay out of sight and think tactically to succeed. For players with that mentality and patience, Survive will be a game that keeps you coming back for a long time. (Buy)

The super-sexy Bayonetta is returning so players with a Nintendo Switch can revisit the button-mashing mayhem and over-the-top styling of these modern classics in a one-two punch of remakes. Most exciting here is the fact that the second game in the series, originally a WiiU exclusive that didn’t get nearly enough love simply because it was on the ill-fated WiiU, will finally get the audience it deserves by making an appearance on the uber-popular Switch console.

Fans of the series will definitely be eager to give it a second playthrough thanks to the sheer excellence of the graphics and gameplay. With killer cut-scenes and some memorable boss battles, this is also a terrific opportunity for the uninitiated to catch a glimpse of the titular character in action. We guarantee you won’t be disappointed. (Buy)

Available today for Premium Pass members and coming soon for anyone else who has money (it is an EA game, after all) Battlefield 1’s Apocalypse DLC is a long-awaited add-on pack to BF1 that tacks on three new competitive maps, melee weapons, gadgets, six new guns and two new bombers but the jewel of this DLC is the all-new Air Assault mode where players will dogfight to reign victorious.

A new influx of missions and assignments are also included in the Apocalypse DLC, adding even more value to the game. If you’re interested in taking your trench warfare further into the Italian mountains or the Belgian countryside, Apocalypse is here for you. Unless you’re not a Premium Pass member, in which case it’ll be waiting for you on March 6th when you’ll be terribly behind the rest of the BF1 userbase. (Buy)