Killmonger really knows his way around a tactical training course. 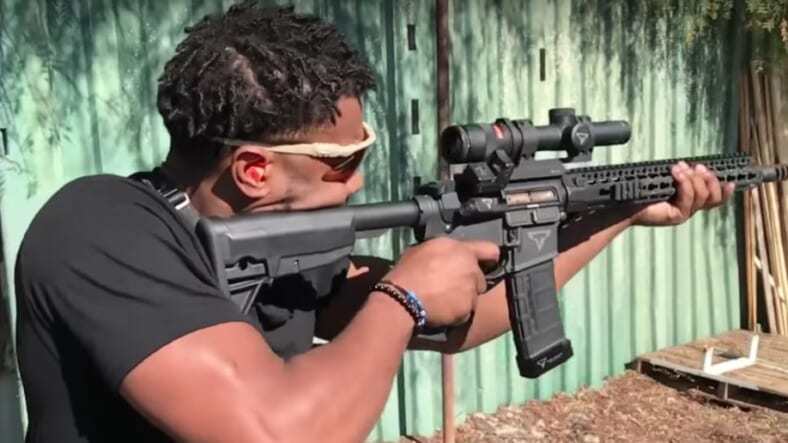 Michael B. Jordan just proved he has the real-life skills to back up his Black Panther character Erik Killmonger’s shoot-to-kill capabilities in a recently-shared Instagram post.

In the video above, Jordan unloads a pistol with expert accuracy as he strafes between targets, throws his sidearm in a hip holster, and advances up the range while gunning down more targets with an AR-style rifle—all in nine seconds flat.

“Let me show off what Killmonger can do,” he captioned the clip.

Like Keanu Reeves and Halle Barry did for John Wick: Chapter 3—Parabellum, Jordan clearly spent some serious time training with weapons in preparation to play the Marvel supervillain.

A longer version of the video posted by custom firearms company Taran Tactical shows off more of the actor’s shooting prowess.

Prep for the Oscar-winning movie wasn’t all fun and gun games. As Men’s Health notes, Jordan revealed in an interview with Oprah Winfrey that he spent so much in isolation to get into the role that he ended up seeing a therapist after Black Panther wrapped.

“I was by myself, isolating myself,” he said. “I spent a lot of time alone. I figured Erik, his childhood growing up was pretty lonely,” he explained.

“So to be able to take that kind of pain and rage and all those emotions that Erik kind of represents from being black and brown here in America…That was something I didn’t take lightly.”

“I didn’t have an escape plan, either. When it was all over, I think just being in that kind of mind state…It caught up with me,” he said.

Unless Killmonger is resurrected from the grave in the forthcoming Black Panther sequel, which is currently being written, Jordan shouldn’t have to put himself in that place again.