Find out why the English are furious before the movie is even done filming. 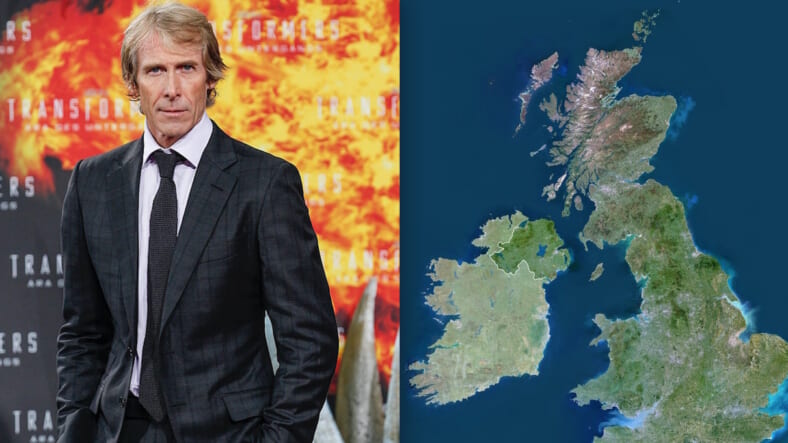 Filming for the fifth and final Transformers hasn’t even wrapped, and it’s already upset most of Great Britain.

The Sun recently published photos from a location shoot at Blenheim Palace, the birthplace of beloved former Prime Minister and WWII hero Winston Churchill. For unknown reasons, the palace had been covered in Nazi iconography, including swathes of swastikas and extras in Third Reich uniforms.

@GeentyJohn apparently for @transformers 5 Bay has transformed Blenheim Palace into Nazi HQ…..hoping this is a false story 😳 pic.twitter.com/diVbY5FEdS

Transformers: The Last Knight will reportedly briefly time travel, perhaps to a parallel past where Nazi Germany defeated the Allies.

It’s all for an overstuffed Hollywood spectacle, but the images are raising some hackles amongst the Brits. Ex-British Army commander Colonel Richard Kemp told The Sun that Winston Churchill would be “turning in his grave” and that “it’s symbolically disrespectful to Churchill.”

The furor was only exacerbated by The Sun‘s cover, which bawled the film was “goose-stepping on Churchill’s grave!”

And it’s worth pointing out: If a British film crew pulled this stunt in the United States, heads would roll.

Michael Bay took some time from manufacturing explosions and Autobot clashes to defend the film to the BBC, although he tight-lipped as to why the property had been converted into a Nazi headquarters.

For what it’s worth, Churchill’s own grandson, Nicholas Soames, rushed to Michael Bay’s defense, claiming it’s all much ado about nothing.

“It’s preposterous,” Soames told The Guardian. “Why can’t they make a film at Blenheim 75 years after [the war ended]? It’s absurd. That’s all I have to say; it’s pathetic.”

Transformers: The Last Knight won’t be released until June 2017, but expect the Queen to storm the premiere with legions of conscripted serfs and siege engines.