“You’re thinly built, you’re too sensitive, you won’t be credible as a block of stone.” 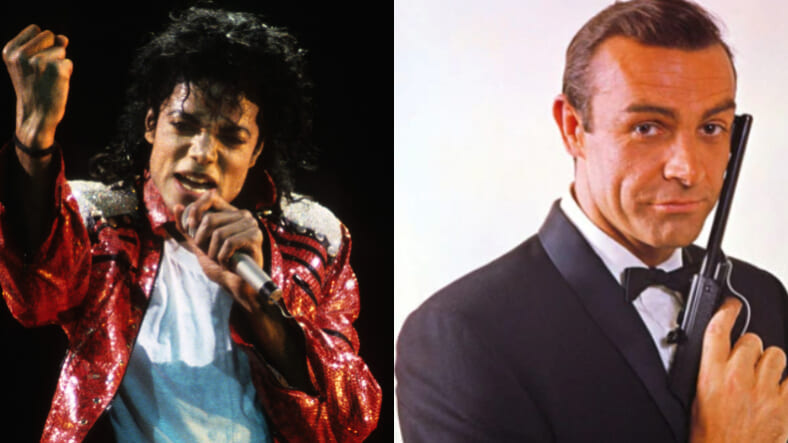 James Bond has been played by seven different actors over the course of 26 movies based on Ian Fleming’s iconic British superspy —and Michael Jackson wanted to be one of them.

At least that’s what legendary Hollywood power agent Michael Ovitz claims in his new memoir, Who Is Michael Ovitz? According to an anecdote published by the New York Post, the King of Pop rallied hard to play 007 in the movies over chips and guac.

“As he talked, his hat fell into the guacamole in front of him, and he picked it out and put it back on – unfortunately, with a blob of guacamole attached, which began to slide down the brim,” Ovitz wrote.

“Ron Meyer tapped my leg to draw my attention to it, and we all watched in horrified fascination as it slid lower and lower while Michael was pitching us hard on how he was America’s next action hero. Then the blob fell off, and Ron totally lost it. I cracked up, too, and Michael stalked out.”

It was only when Ovitz chased him down that Jackson revealed his Agent 007 aspirations.

“I went and found him and explained for fifteen minutes that we hadn’t been laughing at him, but at the incident. … Finally, Michael’s face cleared. ‘Okay, Ovitz. Okay,’ he said. ‘But I want to play James Bond.'”

“I am proud to report I didn’t laugh, this time,” Ovitz added.

Like most of us, Ovitz couldn’t fathom the “Thriller” singer as a suave killer who expresses no remorse for the villains he violently dispatches. He did his best to break it to him gently.

“You’re thinly built, you’re too sensitive, you won’t be credible as a block of stone,” Ovitz recalled telling Jackson. “You’d be great at it, of course, but it’d be bad for you.”

The late musician did appear on the silver screen via cameo roles in Back to the Future Part II and Men in Black II. Perhaps the closest Jackson came to shooting up baddies in a blockbuster was when his signature grunts were dubbed into this ultra-violent John Wick supercut: