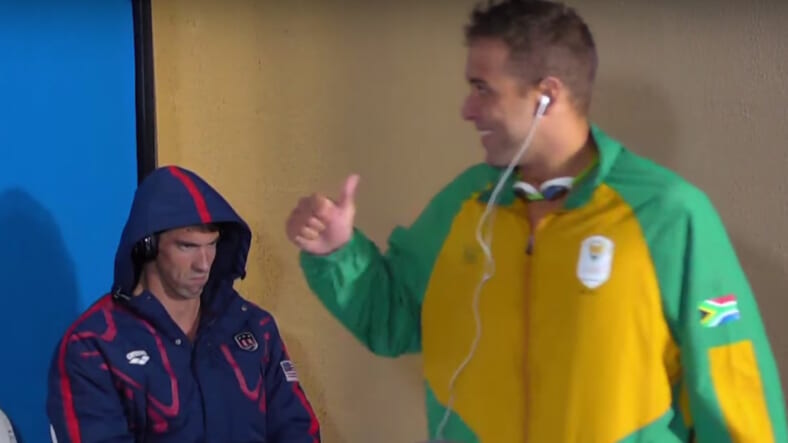 Chad le Clos, who famously beat Michael Phelps at the 2012 London Olympics, thought he’d have another go at his long-time foe before the 200-meter butterfly semifinal in Rio.

During warmups, the South African swimmer tauntingly danced and shadowboxed in front of Phelps, who was forced to endure the display as he sat in the ready room.

Phelps’s rage was palpable. As le Clos continued his show of chest puffing, Phelps broke out a game face to end all game faces: the #PhelpsFace, as the Internet quickly deemed it.

NBC caught the whole thing, Phelps’s clinched fists and all.

Of course, Twitter was all over the moment, many comparing the hooded, brooding Phelps to Star Wars‘ Kylo Ren.

#PhelpsFace is how I imagine Kylo Ren looked under his mask. pic.twitter.com/ybNF5Lfkd8

The face I will give if anybody ask me for money during this #Change…… #PhelpsFace #PhelpsLeClos pic.twitter.com/yJOySqLdIT

The dude ain’t fronting, either. In the semifinal, Phelps finished second, and le Clos finished third. Maybe he should just stick to shadowboxing, huh?