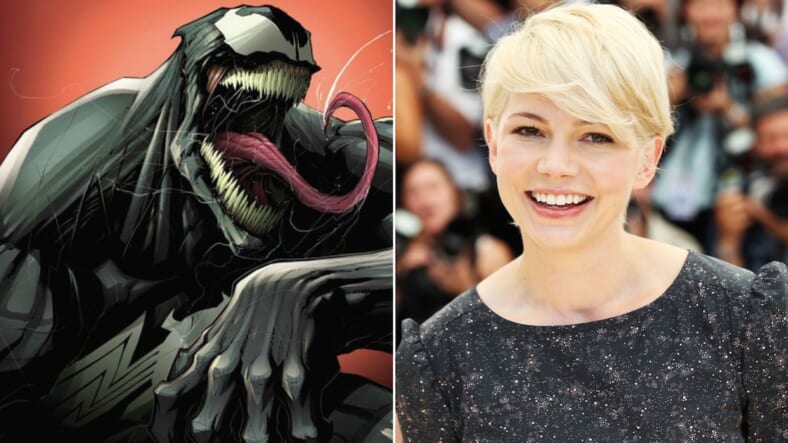 Four-time Academy Award nominee Michelle Williams (All the Money in the World, Manchester by the Sea) has confirmed her involvement in the upcoming Marvel adaption Venom.

In an interview with Screen Rant, the 37-year-old actress announced she will play Anne Weying, the ex-wife to Eddie Brock (the real-life alter ego of Venom), to be played by Tom Hardy.

They will be joined by Woody Harrelson and Riz Ahmed in undisclosed roles, although one of them is all but sure to play villain Carnage (a.k.a., Cletus Kasady).

“We’re having fun. Um, we’re having fun. It’s, um, well for me it’s Tom (Hardy). I just thought, well, that guy knows what he’s doing. I’m just going to go steal some of his moves, figure out what he knows,” Williams said, skirting any specifics.

“I just wanted to, you know, you’re only as good as the people you play with and I really wanted to challenge myself with him as a partner.”

“I’ve done one other movie where I was asked to track a tennis ball with my eyes and pretend it was a giant creature thing. Not my favorite thing in the world to do, but it is a skill set and I’m trying to learn it,” she added.

Still, Williams revealed nothing about how her character, in a love/hate relationship with Brock in the comics, will be adapted for the silver screen.

“Uh, she’s, geez, what can I tell you? Not too much right now,” Williams said.

Since she wouldn’t, Screen Rant detailed her character arc from the comics.

Appearing for the first time in Amazing Spider-Man #375, the character is a successful lawyer who also has narrative ties with Peter Parker. But as her story progressed, she eventually becomes She-Venom, also known as The Bride of Venom, leading her down a dark and highly emotional path.

Precious little about the movie, to be directed by Ruben Fleischer (Zombieland) and produced by Sony, except that it will have an R rating and most closely follow the story lines of the 1993 Legal Protector comics, which involved Spider-Man.

Tom Holland popping up as Peter Parker is certainly a possibility as the Spider-Man franchise is also controlled by Sony.

There’s still no word on when the Venom movie will actually come out.