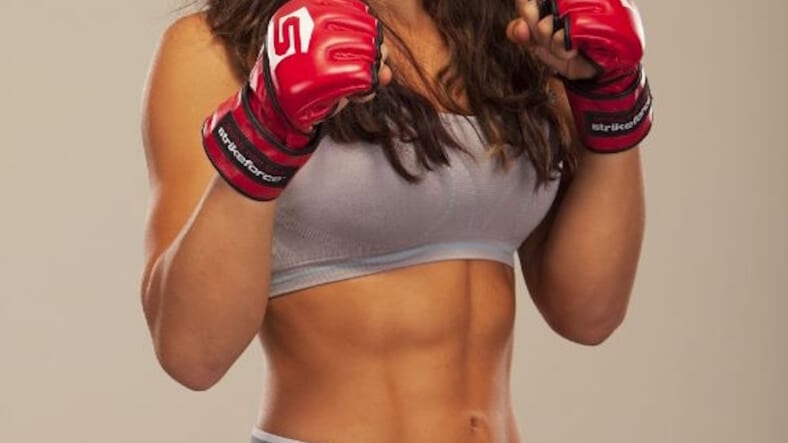 1. She says she’ll finally beat Ronda Rousey if they fight a third time:

“I’m very confident. I was telling everyone that Ronda Rousey is not this unbeatable woman, and then Holly Holm went out there and kicked her head off, and I was like, ‘See? I told you she was only human.’ And then I went out there and choked out Holly. It just goes to show you on any given day that someone can go out there  and win fights. I wanna rematch her. I’m so excited I have the belt. I’m supercharged and I’m confident.”

2. She thinks Rousey has lost her edge:

“She’s definitely been exposed for sure. I really question her mentality. I know the first thing I want to do when I come back from a loss is to get in the gym and get better. She said she wants to have kids with Travis Browne. I don’t know where her mind is. Is this a comeback fighter? We’re questioning whether she’ll ever fight again. She’s in a weird mental state. And I feel like I’m mentally the best I’ve ever been. My camp is on a five fight win streak. Everything is coming together. I feel like I’m evolving quickly with my confidence, physically, just everything.”

3. But even if Tate doesn’t fight Rousey next, she’s ready for whoever the UFC puts her up against:

“I don’t know who’s gonna be next. I still have to talk to UFC. I gotta let the dust settle and figure out what my options are…[Rousey or Holm] would be excellent fights for sure. Also there’s Amanda Nunes. There’s Cat Zignano, there’s Julianna Pena. I don’t want to get fixated on that person until I know who it is. As a champ I have to be ready as a champ for anyone anytime. I have a big target on my back. I’ll be ready for whoever.”

4. Her favorite post-fight ritual is drinking Budweiser and eating cupcakes:

“I usually drink the beer and then eat the cupcake. Then I drink another beer and eat another cupcake. That’s the thing I really look forward to. I gotta have a cupcake and a beer.”

5. She’s going to be in a movie with Holly Holm and Cris Cyborg:

“It’s called Fight Valley and it’s my first feature film. I just dove in and did the best I could. I don’t think I’m gonna win any Academy Awards on this one. I had fun with it, and hopefully will get more opportunities like that. It’s about two sisters, one poor and one rich, and one goes into underground fighting. I did it with Holly Holm and Cris Cyborg.”

“For me it would be a home-cooked meal. Surprise me, vacuum for me. And make dinner for me. I absolutely love pad thai. And obviously cupcakes afterwards.”

7. If she could beat up any celebrity, who would it be?

“Justin Bieber, I’d leave that to Nate [Diaz]. Kim Kardashian? I’m personally OK with her. Maybe Snookie or somebody like that?”

“I kinda feel like we need a little bit more tough love. I’ll probably get a lot of flak for this, but I kinda think we’ve been Democrat for too long, so I kinda think we need a Republican in office…I don’t know enough about [Ted] Cruz. I know there’s pros and cons to Trump, and people talk crap that he’s had a lot of failed businesses, but failing a lot sometimes means you’ve tried more. And a lot of those people have succeeded more times than they failed.”