“You can be the greatest of the great, and then you can really suck at times.” 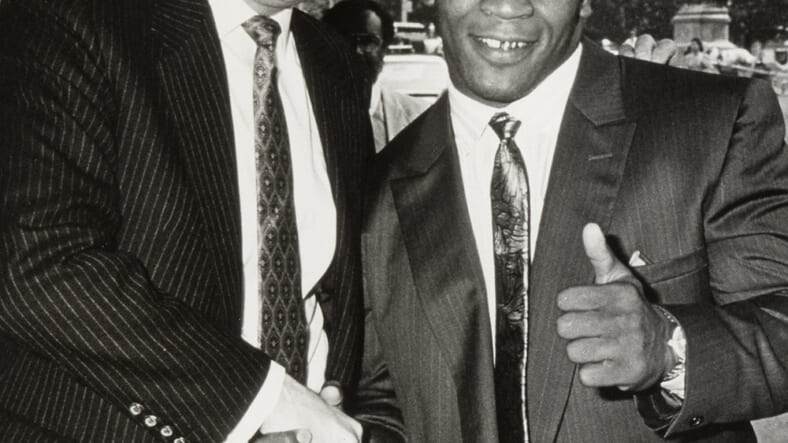 Mike Tyson may have morphed into a genial pop culture character who appears on Lip Sync Battle, wipes out on hoverboards and performs popular one-man shows, but the former “Baddest Man on the Planet” is still refreshingly unvarnished with his opinions.

Well, most of the time, anyway. When Tyson was made available to chat with Maxim by phone about his role in the new kung-fu indie Ip Man 3, the former heavyweight champ waxed about the legacy of Bruce Lee, his favorite fighters in boxing and the UFC, and even the nature of romantic love.

But when asked about his former boxing promoter and longtime pal Donald Trump, whom he endorsed for president back in October, Tyson bobbed and weaved like he was still being coached by Cus D’Amato.

Check out our latest chat with Iron Mike, and then revisit Tyson’s musings about the invasion of boxers from Russia, the Ukraine and Kazakhstan.

So you’re starring in Ip Man 3 with Donnie Yen. Were you always a fan of martial arts movies?

Yes, absolutely. I was attracted to watching these guys jump 40 miles in the air as they fly around with magical weapons. You know what I’m talking about, right?

Of course! The Ip Man character is based on Yip Man, the real-life teacher of Bruce Lee. Are you a fan of his movies?

I’m a fan of his philosophy. And yeah, Chinese Connection, Fist of Fury, Enter the Dragon.

Could you have beaten Bruce Lee in your prime?

Hey listen, I don’t know about that stuff. Because Bruce Lee, he didn’t believe in fighting in tournaments and stuff. He basically believed in: “Let’s do it right now.” But Bruce Lee was really a street fighter, like an MMA fighter for real. No one talked about MMA before that, or grappling. He said, “I don’t believe in grappling, because I equate grappling with being on the floor and I equate being on the floor with being stomped.” And they said, “What do you mean?” And he said, “One guy maybe, but I’m fighting five or six guys but I can’t be on the floor, wrestling around.”

Wow, I hadn’t heard about him saying all that.

It was just announced that you’re stepping into the Octagon in EA Sports’ UFC 2 game. If you were coming up today, would you go into boxing or UFC?

Whoever paid me the most. I go to UFC fights all the time. [UFC boss] Dana White is one of my best friends. There’s a bunch of guys I like. You know Conor [McGregor] is the main attraction nowadays. Jon Jones is really awesome. And the heavyweight, [Cain] Velasquez, is a good fighter, too.

Speaking of Conor McGregor, he’s been calling out Floyd Mayweather again. People love to talk about UFC fighters versus boxers. Who do you think wins that fight?

It’s different rules. But this is were it gets interesting: styles don’t win fights, morale wins fights. Mayweather is the type of fighter that avoids punishment. I don’t think Floyd would like Conor grabbing him. The boxing gloves they have make them more vulnerable than anything. And Floyd wouldn’t be able to fight with them gloves.

Sounds like you’re giving Conor the edge. How do you feel about the fact that boxing’s current heavyweight champion, Tyson Fury, was named after you?

He beat Klitschko and is pretty entertaining outside the ring, but he’s not even close to how great you were in your prime.

Listen, check this out: He beat the most feared heayweight in 15 years, so let’s just say what it is. A lot of guys that were really, really good couldn’t beat Klitschko.

Klitschko just had a baby, married that Hollywood actress [Hayden Panettierre] and she went through all that postpartum stuff. And you know, women can screw you up. Love is a form of  insanity, dude. He didn’t throw two hard punches the whole fight. This is a great fighter. You can be the greatest of the great, and then you can really suck at times.

Does Fury beat him again when they rematch this year?

I can’t see Klitschko losing that rematch. I don’t think nobody out there can beat him if he’s actually fighting. But let’s keep it real. He’s tired. He’s been fighting his whole life. This guy is a scholar. Why don’t he stop? He got the money. But you can’t tell a fighter when to stop. He should retire before he starts getting hurt. Leave that shit alone.

Who are your favorite boxers right now?

Muhammad Ali recently came out against Donald Trump’s proposal to ban Muslims from entering the U.S. As a practicing Muslim who has endorsed Trump, what do you think about that plan?

Right now I’d love to talk to you about that, but they giving me slack about talking politics. I really wish I could, but they won’t let me.

Are you going to vote for him?

I can’t talk politics, that’s what they’re telling me.

Well at least give me a prediction on who will win.

And you’re still OK with that?

I don’t know if it’s OK with me, that’s just what it IS…I love you, brother. But they telling me to get off the phone with you. They say you’re being one of the bad guys now.

Well, I don’t wanna be a bad guy. Are you still doing your one-man show, Undisputed?

I got a one man show in Vegas and one in Reno, Nevada on February 6.  We’re doing Undisputed but we’re also gonna make some other stuff happen while we do it.

Can you reveal any details about that other stuff?

No way, Jose. You gotta stay tuned. They say I got another call, Chris. But it’s been cool talking with you.