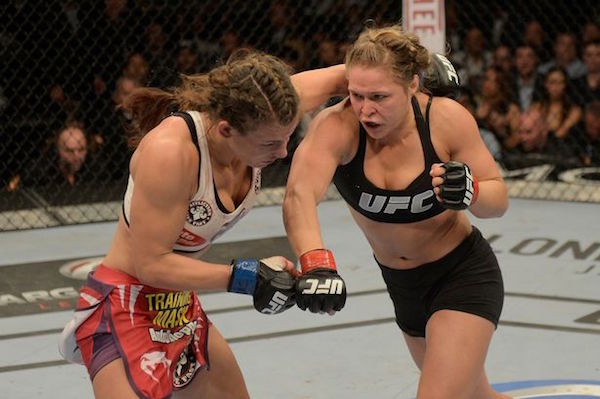 As soon as Miesha Tate choked out Holly Holm and captured the UFC women’s bantamweight belt, all eyes turned to her first title defense—a planned fight this fall with Ronda Rousey. And while plenty, including this very publication, were eager to declare Rousey the favorite given her two previous wins over Tate, the new champ has a different take.

“It’s like this is a broken woman,” Tate added.

Tate mentions of Rousey’s “mindset” were an obvious reference to her emotional appearance on Ellen where she said she considered suicide after Holm beat her last November. “I was like, ‘What am I anymore if I’m not this?’ And I was literally sitting there and thinking about killing myself in that exact second,” Rousey said in February.

It’s little surprise that Tate’s seizing on that comment. If a fighter shows  weakness, you pounce and she’s not the only one who thinks so. On Tuesday, Invicta FC featherweight champion Cris Cyborg said Rousey’s suicidal thoughts indicate a “weak mind.”

It’s not just Rousey’s inner demons that shows weakness though, Tate says. It’s also her desire to reproduce. On Monday, Tate told TMZ that as far as she can tell, Rousey’s motivation in life right now is to have “have Travis Browne’s baby.” She added, “That doesn’t sound like a very motivated comeback.”

Beyond believing that Rousey’s head isn’t in the game, Tate says her own improvements in the cage will make her third fight with Rousey different from the first two, in part because Holm provided a blue print for beating the Rowdy One.

“I just saw how Ronda got demolished with clean striking. I’ve improved so much and I think I showed that in the fight with Holly,” she told Mohr.