The First Reactions to ‘Mission: Impossible – Fallout’ Are In, And People Are Blown Away

Tom Cruise’s stunt work is getting a lot of praise. 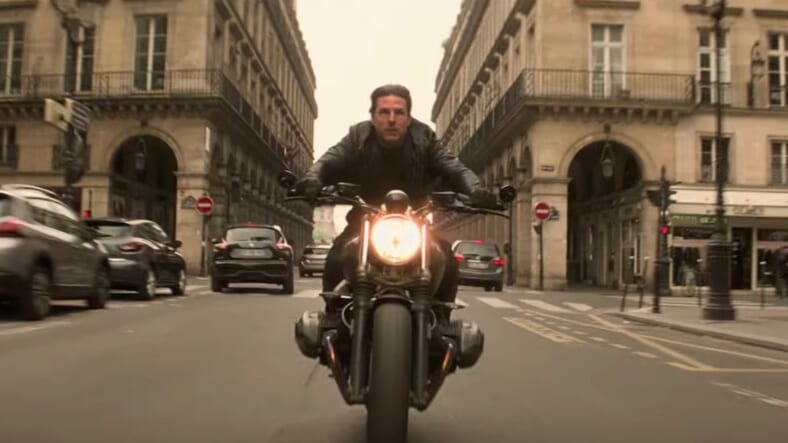 The latest Mission: Impossible installment, Fallout, had its world premiere in Paris last night, and the early reactions are in.

Those lucky enough to attend were blown away, buzzing on Twitter that Tom Cruise is in prime form, that the action sequences, particularly one set in a bathroom, are among the best of the franchise and that it is the perfect sequel.

The Mission: Impossible franchise is over 20 years old, but Ethan Hunt clearly still has plenty of fight in him.

Just walked out of #MissionImpossibleFallout, which is absolutely fantastic. This movie entertains you in every which way – incredible action sequences, nail-biting suspense & hands down the series best finale yet. My favorite movie of the summer right there – loved every second pic.twitter.com/hWUnI7P2jQ

Happy to report #MissionImpossibleFallout is a fantastic movie that's absolutely loaded with *insane* action and edge of your seat holy shit moments. Not sure how @TomCruise keeps raising the bar but I'm so happy he does. The bathroom fight scene alone is worth price of admission pic.twitter.com/FPhnz37VCK

Just got out of #MissionImpossibleFallout and I am happy to report that like the previous films, the creators don't get complacent. The film is bigger and better and amazing sequences like the bathroom brawl and the finale cement this fact. pic.twitter.com/CzF9Cn2HjQ

Oh man the action in #MissionImpossibleFallout is unbelievable! 💪

I’m not sure that @TomCruise is human. The amount of stunts he pulls off in this is mind blowing… especially with a broken freaking leg! pic.twitter.com/Fchu5LtfyA

#MissionImpossibleFallout is the most perfect sequel! It does EVERYTHING RIGHT! Add it to your movie must-see list this summer. Opens on July 27! You won't be sorry! xo

Just saw #MissionImpossibleFallout – it was the very 1st screening of the film with lots of the cast and team in the room. @chrismcquarrie said it was finished 5 days ago. I'm not sure how he keeps upping his game but @TomCruise is fantastic. Stuntman, action hero extraordinaire.

We saw #MissionImpossibleFallout last night, and holy sh**, @chrismcquarrie has delivered the grittiest and biggest “Mission” yet. And that bathroom fight, tho? *chef’s kiss pic.twitter.com/T9ohiyhewq

Mission: Impossible – Fallout features much of the same cast as Rogue Nation, including Alec Baldwin, Simon Pegg and Hot 100 nominee Rebecca Ferguson. They are joined by newcomers to the franchise Angela Bassett and Henry Cavill as CIA agents.

Here is a summary of the new movie from SyFy:

After Syndicate leader Solomon Lane (Sean Harris) slips through the fingers of the IMF, Ethan Hunt (Tom Cruise) finds himself in a race against the clock, trying to prevent a worldwide disaster of nuclear proportions. To make matters worse, the CIA (Angela Bassett and Henry Cavill) are on his tail, with the agency questioning both his motives and his sanity.Ethan’s gonna need all the help he can get from his friends Luther Stickell (Ving Rhames, the only actor besides Cruise to be in every movie so far) and Benji Dunn (Simon Pegg), IMF Secretary Alan Hunley (Alec Baldwin), Hunt’s wife Julia (Michelle Monaghan), and former MI6 agent Ilsa Faust (Rebecca Ferguson).And even with their collective aid, there’s no sure chance of success. The only missing person is Jeremy Renner’s William Brandt; Renner was too busy shooting the third and fourth Avengers movies to reprise his role.