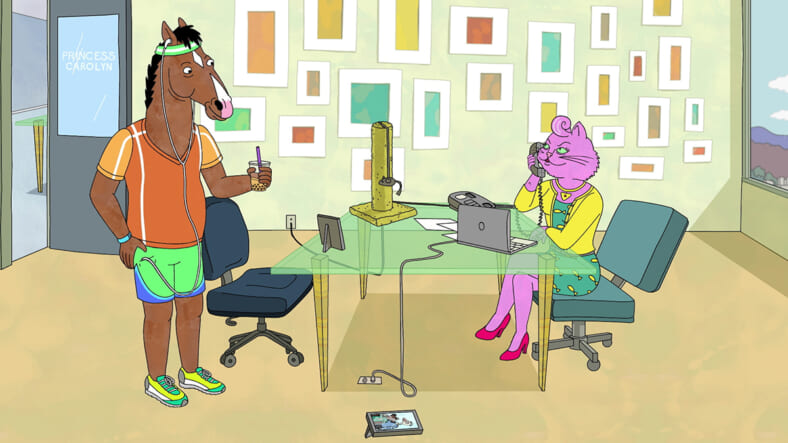 There’s only so much that can be expected of a person on New Year’s Day, especially on a Friday after a busy and stressful holiday season. Many of you (ok, us) are going to drink more irresponsibly tonight than any other night of the year, and that means we will be meeting the New Year with varying degrees of pain and confusion. But it’s important to remember that you do not have to get out of bed tomorrow. All you need is food delivery, Advil, and a TV and/or movie binge to gently usher you into 2016. Here are our suggestions, ranked by effort level (low to high).

A New Year’s Law & Order marathon is practically a tradition by now. Even though there’s usually some way you can easily binge on your favorite fucked-up crime procedural almost any weekend of the year, New Year’s Day is the perfect time to zone out and let Olivia Benson & crew do all the work: USA is airing a special 24-hour Law & Order: Special Victims Unit marathon that starts at 6 a.m. Friday and ends on Saturday at the same time. Guaranteed you will watch more episodes than you think you can.

Since Bojack Horseman is almost always hungover and/or depressed, you’ll easily identify with the protagonist of one of TV’s most under-recognized shows — even though he’s a talking horse. The Netflix original series is expected to return for a third season sometime in 2016, so New Year’s Day is a perfect time to find out what obsessive fans are so excited about.

Paul Thomas Anderson Binge: Boogie Nights, Magnolia, Inherent Vice Effort Level Required: Collecting the empties lying around your apartment and leaving them in a garbage bag in the middle of the kitchen

This hand-selected Paul Thomas Anderson retrospective will remind you of when you thought he was America’s best living filmmaker and will gently ease you into Inherent Vice, his hardest-to-follow movie that ended up not being very popular last year because no one who saw it could describe it. If you’re stoned or have previously read the Thomas Pynchon novel, it’ll be NBD. But you didn’t, did you?

None of the Back to the Future movies require a particularly high level of cognitive function, but you want to be able to follow the basic plotline lest you get lost and wonder why Michael J. Fox is romantically pursuing his mother. Ok, that’s super weird even in context.

As you most certainly know, a Twin Peaks reboot is coming to Showtime next year, so now is the time to watch or re-watch the original David Lynch series and find out what all this Laura Palmer business is all about. Ed. Note: Mild hallucinogens may help. Ed. Note #2: If it doesn’t make sense, it’s not because you’re brain dead.

Nothing pairs better with white flour carbs than the classic Italian Mafia trilogy. The complete Francis Ford Coppola family saga is about 18 hours long, so you have your whole day and evening set. There are a lot of characters to follow and some subtle but important scenes, so this option won’t work if you woke up in a jail cell or a stranger’s car. Unless you have the whole thing memorized.