It was just too dangerous for real-life pilot Cruise to fly himself. 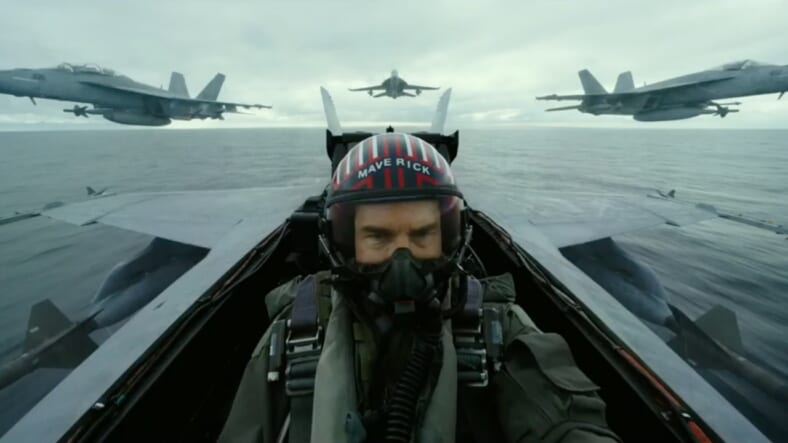 Bruckheimer said Cruise does fly “a P-51 in the movie and he flies helicopters,” reports USA Today,

“He can do just about anything in an airplane,” the producer continued, but “the Navy wouldn’t let him fly an F-18.”

A reminder: In this sequel to Top Gun, it’s 20 years later and Pete “Maverick” Mitchell (Cruise) is still a Navy test pilot and he’s been actively avoiding promotion because he doesn’t want to get out of the cockpit.

A situation arises needing pilots for a highly unusual “specialized mission,” and Maverick is ordered to train a new set of Top Guns. Among them is Lt. Bradley Bradshaw (Miles Teller), the bitter son of Mitchell’s late flying partner and friend, Nick “Goose” Bradshaw.

For a setup like that, it was still necessary for cast members to understand the fighter pilot experience. In addition to getting footage from F-18 cockpits equipped with IMAX cameras, Cruise and his co-stars still got to do ridealongs. From USA Today:

Cruise and co-stars Miles Teller and Glen Powell were put through aerial boot camp before cameras started rolling. “When you’re pulling heavy Gs, it compresses your spine, your skull. It makes some people delirious. Some people can’t handle it,” said Cruise, who, as a producer on the film, arranged for his co-stars’ intense training. “So I had to get them up to be able to sustain high Gs. Because they have to act in the plane. I can’t have them sick the whole time.”

Barfing would definitely make it difficult for the audience to suspend disbelief.

Despite active productions, studios, and theaters being shut down everywhere due to the coronavirus pandemic, USA Today reports Paramount still plans to release Top Gun: Maverick on June 24, 2020.