Even Selena Gomez in a bikini can’t save this lackluster sequel. 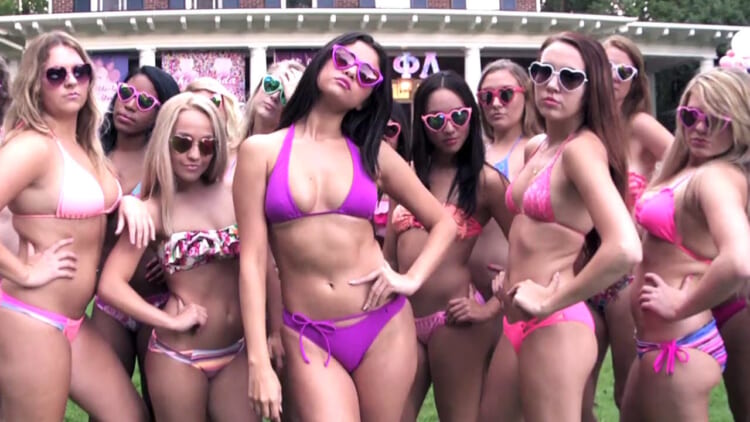 Let’s be clear: the only reason Neighbors 2 exists is because the first film only cost $18 million and went on to gross $270 worldwide — and that’s just theatrically.

Nobody likes comedy sequels, and for good reason; they almost exclusively exist as economic decisions rather than story-driven ones, not to mention the fact that laughs are incredibly hard to replicate without drifting into familiar territory. More often than not, comedy sequels are just tired retreads of the original film, with the same jokes, situations, and nothing really new to say.

The premise of Neighbors 2 is exactly the same as Neighbors, except instead of a bunch of frat bros moving in next door, this time it’s a DIY-sorority house full of misfit girls led by Chloe Grace Moretz. Mac (Seth Rogen) and Kelly (Rose Byrne) still live in their poorly-placed home from the first film, but are in the process of selling it. The new buyers have 30 days to back-out of the deal pending any egregious oversights, like, say, a sorority deciding to move in next door.

When asking the girls to not party for 30 days goes exactly the way you’d expect it to, Mac and Kelly (again) declare war on their not-so-friendly neighbors, with the help of frat bro/beefcake Teddy (Zac Efron) from the first film. We briefly catch-up with some of the other bros from the first film, but Moretz and her crew take the majority of the screen time.

Neighbors 2 is already being hailed as “progressive,” and while it’s certainly trying to be, therein lies the problem — it’s all so incredibly transparent. The dialogue during any of the actual plotting sequences with the sorority girls borders on laughable, and the film relies too heavily on these misguided views and preachy moments as motivating plot points. It’s one of those movies that thinks it’s taking on sexism because the word “sexist” gets thrown around a whole lot.

The film preaches feminism and repeatedly drags on about institutionalized sexism, but then parades Zac Efron around shirtless as a plot device. Earlier, an offhand gag renders one of female characters Nora (Jonah Hill’s standout sister Beanie Feldstein, who you’ll surely be seeing more of) the butt of a fat-joke when she can’t get into a party. Neighbors 2 wants to have its (beef)cake and eat it, too, but all of that “yay feminism!” verve is really in-name-only. Sheer good intentions do not guarantee an sort of actual impact.

But I digress. I despise joke policing and the last thing I want to do is rag on a movie for “offending”, but that’s not the point. Neighbors 2 so deliberately wants points for being “progressive” that it opts to double down on that rather than, say, craft new jokes or make an original movie.

All that aside, there are plenty of jokes that straight up don’t land, and a number of sequences that are airlifted from the original film without any real updating, hoping that chuckle-of-recognition you make at the sight of a familiar gag will be enough. Lisa Kudrow has a cameo, again, to do the exact same joke she did in the first film, again. We get funny pop culture references disguised as party themes, again. Those damned airbags that dominated the marketing of the first film? Of course they’re back!

Zac Efron doesn’t get a whole lot of screen time, but he makes the most of what he gets and is genuinely funny in every scene. His chemistry with Rogen and Byrne provides many of the film’s big laughs, as well as his interactions with his former frat bros who are getting sick of his insistence on living the same life he lived in college. Ike Barinhotlz and Carlo Gallo get a lot of laughs (again) as Rogen & Byrne’s support.

Chloe Grace Moretz is definitely miscast here as the super-chill, pot-smoking sorority leader, and her “sisters” (Beanie Feldstein and Kiersy Clemons) get more laughs than she does. Moretz slips in and out of an “Eminem”-style demeanor (as described by her father in the film played by Kelsey Grammar) and often seems to playing a different character from one scene to another.

Neighbors 2 is at its best when it’s letting its characters interact and be themselves, and it stumbles when it tries too hard to “say something.” It’s a cash-grab sequel that aims to be a self-aware criticism of the first film as well as a treatise on institutionalized sexism when it should have just settled with “being a funny movie.”

If you enjoyed the first film, you’ll enjoy this one, but don’t expect a reinvented wheel.