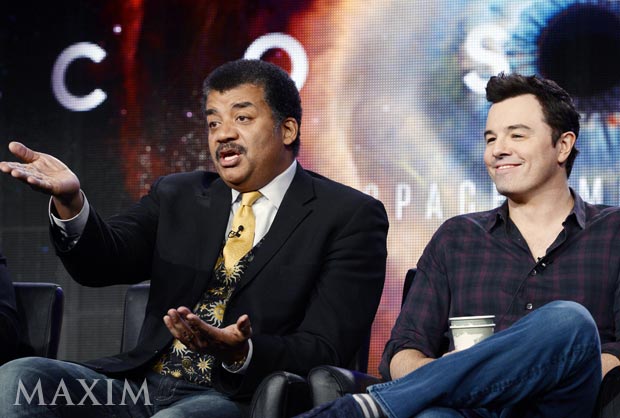 Why did you decide to bring Cosmos back 34 years after Carl Sagan’s last show?It’s always the right time to talk about the universe. The question is whether all the forces align to realize that idea and that vision, and the forces aligned. A lot of pieces came together – especially for it to land on Fox, which was to everyone’s great surprise when it was announced. We were shopping around early versions of the scripts as many as five years ago. But it turns out that now is a really good time… because we seem to be at an all-time high of people’s skepticism of science and what role it plays in our life and in our civilization. Skepticism is good, but you have to know what it means. Skepticism is not: “I don’t like that result therefore I don’t believe it.” It’s not: “That result conflicts with my philosophies so therefore it can’t be true….” I’d like to think that science can re-introduce itself into our lives so people can know what it is, what it isn’t, how it works, why it works. So if you make a decision, political or cultural, it’s based on objective realities that have been established by the methods and tools of science.Science isn’t exactly a narrow topic. How do you decide what to cover in each episode?There’s a huge, long brainstorming effort. I was in the early brainstorming but the bulk of the effort was between Ann Druyan and Steven Soter, who are the two writers of the series. They spent months and months and months drawing on their knowledge of science, history, and literature and found very interesting characters, some of whom I knew already but some of whom were relatively new to me. Did you ever feel silly pretending to fly around in a spaceship?Oh no, that was the most fun part of the whole thing! I loved that ship. Of course, it’s all green screen out of the front window, but I know what I’m looking at. I was digging it…. I kept saying, “Gee, I’ll get me one of these!” And by the way, it’s a “ship of the imagination” not a spaceship. It goes inside of molecules, not just to space.

Photo: Kevork Djansezian / CorbisHow did Seth McFarlane become involved in the series?He called for lunch with me knowing that I’m a scientist. We had met briefly earlier that year. He said, “What does a guy do if I want to make a difference in the world of science?” At the time we were already shopping around the early ideas of Cosmos and I thought, “Let me bring the idea to him.” I mentioned it and he said we should take it to Fox. In the first episode you gave a very personal anecdote about meeting scientist Carl Sagan, who originally hosted Cosmos. Why was that important to include?I wanted to make it clear that there’s a torch being passed. Cosmos is an idea. While it’s tightly associated with Carl Sagan, it’s really an idea about how to present the universe in a way where you feel connected to it and a participant in it and an observer of it. This has the power to inspire a viewer intellectually, emotionally, and even spiritually.

I have to quote Ann [Druyan]: It’s for anyone with a beating heart.Last year you made some comments about the scientific flaws in Gravity. Is it ever hard to suspend your disbelief when you’re watching movies or TV shows like that?Never. I just ride with it. They want me to believe that, OK. It’s not a problem at all. When I comment on a film, it’s only because it was clear that the director or the producer was trying for accuracy. Only under those conditions do I comment on how much they didn’t get accurate. In fact, they should view it as a compliment because I don’t list the scientific flaws of Star Wars. That’s a waste of time. What I tend to do is list the errors in the movies that are trying hard to not make errors. Then I list what somebody might have gotten right in a movie that made no attempt to get anything right.What’s an example of that?For example, in Star Wars, the scene with the double suns. That’s a now-famous scene. We’ve known about this in astrophysics forever and finally someone portrayed it in the cinema. Most of the stars you see in the night sky are traveling with companions, with one or more stars in their system. It’s something I can tweet about and say, “Despite everything else, that was an awesome scene. They got that one right!”So J.J. Abrams can breathe easy that you’re not looking over his shoulder on the new Star Wars movie?I’ll see! If there’s something worth commenting on, I will. He cares a little bit. He’s using the legacy that already exists. In the first of his Star Trek films, there was the red matter that would turn a planet into a black hole. I thought that was a stretch, but you give it to him. Why would it turn a planet into a black hole and not the ship that’s carrying it? These are little questions that don’t get answered.The first season of “Cosmos” is available on DVD and Blu-ray June 10.