The action/comedy is the most expensive Netflix blockbuster yet. 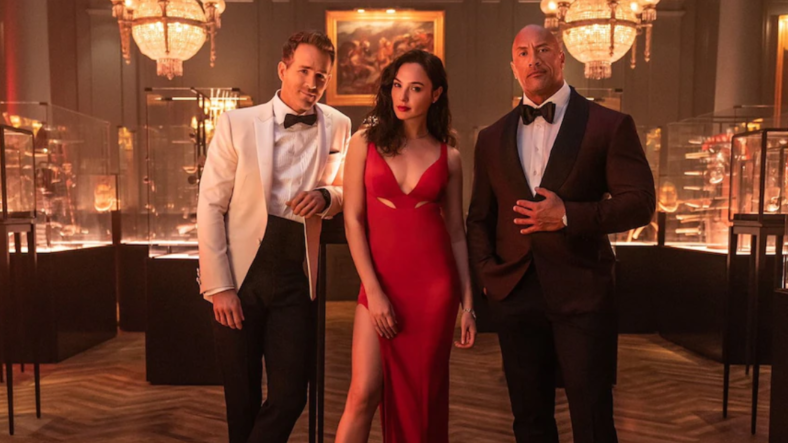 The Rock, Deadpool, and Wonder Woman walked into a Netflix production and now we have the punchline: Red Notice. This is just the first official trailer for the movie, of course, not the whole thing, but we’ve got a great idea now as to what we’re about to get—an action-comedy film featuring Ryan Reynolds, Dwayne Johnson, and Gal Gadot.

There is high-dollar larceny, lots of artful hand-to-hand combat, and some solid comic timing from performers known for being as skillful with a joke as they are with firing guns and kicking ass.

When an Interpol-issued Red Notice — the highest level warrant to hunt and capture the world’s most wanted— goes out, the FBI’s top profiler John Hartley (Dwayne Johnson) is on the case. His global pursuit finds him smack dab in the middle of a daring heist where he’s forced to partner with the world’s greatest art thief Nolan Booth (Ryan Reynolds) in order to catch the world’s most wanted art thief, “The Bishop” (Gal Gadot). The high-flying adventure that ensues takes the trio around the world, across the dance floor, trapped in a secluded prison, into the jungle and, worst of all for them, constantly into each other’s company.

Red Notice was first announced in 2018 and initially, it was the focus of a bidding war between Universal, Sony, Warner, and Paramount Pictures. Rights ultimately went to Universal. After coronavirus pandemic-related delays, Netflix saved the day, and filming was finally complete in late 2020.

Don’t expect any more delays for this action flick, though—look for Red Notice on Netflix when it begins streaming on November 12, 2021.