Neve Campbell Is Fully Prepared to Face Off Against Frank Underwood

The latest ‘House of Cards’ addition talks her new role, comparing Underwood to Ghostface, and the real world of politics today. 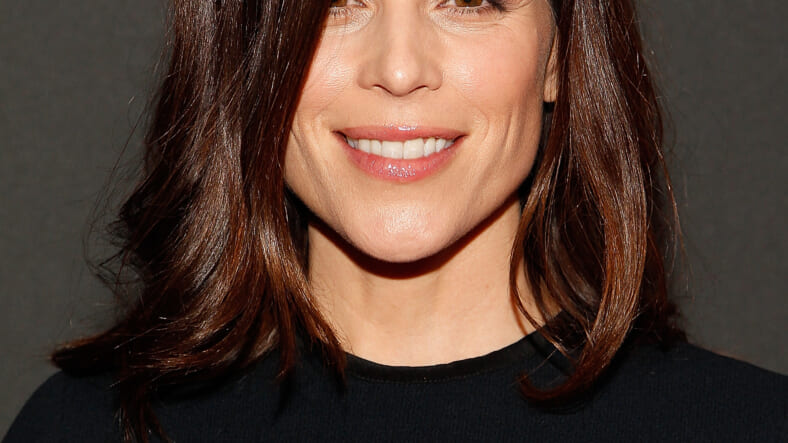 There are few people capable of standing up to Netflix’s very own power-hungry POTUS, but thankfully, we may have just found him a worthy adversary.

Neve Campbell, the Party of Five star and ’90s scream queen of our dreams, has strapped herself in for the political roller-coaster ride of her life as she joins the phenomenal cast for House of Cards‘ fourth season. The 42-year old actress’s role as goal oriented Leann Harvey will place her alongside Claire Underwood (Robin Wright) to guide her as she begins her journey to the White House, with attacks coming from all sides due to her husband’s disapproval of her congressional bid. Campbell may have past experience facing off against a ruthless, and not to mention psychotic, villain, but it’s hard to predict the moves of the fictional Frank Underwood.

“You know to be honest, I’d be more terrified of Frank Underwood than Ghostface, she told Maxim.” I think Ghostface is predictable and you know what his intentions are, and with Frank, you just never know.”

Despite joining late in the game, Neve manages to stand out amidst the ranks of highly reputable actors and actresses, allowing her and her character to fit smoothly into the political fold. Leann Harvey is a woman you don’t want to mess with.

Maxim spoke with the House of Cards star on her new role, facing off against Frank Underwood, and today’s political race.

You’ve been tackling smaller, meatier roles as of late, so what appealed to you about House of Cards and your character of Leann?I was a big fan of the show already. I think Beau Willimon’s writing is brilliant, and the writing team are amazing on the show. Then, obviously the talents are great, so that was a huge draw. And the idea of getting to play an unapologetically strong and talented woman was attractive to me.

Stepping into a role of this caliber in the world of politics, how did you personally go about preparing for it?You know, it was really just about having conversations with Beau Willimon. He’s very politically-minded, he was involved in politics before he got into writing, so he’s very familiar with the world obviously. So really, just asking him questions about what it would mean to be a woman in this very-obviously male dominated world, and what that would mean and what it would take to be successful in that world, and then just going from there, really. The journey that he had in mind for her, and getting an understanding of that.

Coming into a show that’s been around for a while and is so established in the eyes of viewers, how did you feel adapting to the lingo and the environment?It was daunting at first, because I am such a big fan, and because it is so well-revered, you want your entrance to be seamless and not suddenly stand out as a bad seed. For me, it was just about being respectful of all of the actors and observing their energy and how everybody worked on set. To be honest, they all have a lot of fun, and the crew are amazing. It’s really high-caliber in every department. And, everyone takes it very seriously, but they also are very grateful for their jobs and everyone has a good time. It was a very inviting atmosphere.

So what can you tell me about Leann and how she sets herself up in D.C.?Leann has already been very successful in her own right, she’s very intelligent, she’s been in Washington for some time, and also spent a lot of time in Texas in the political world, and she’s invited by Robin Wright’s character to assist her in a campaign. So that’s where my journey begins, anyway.

Would you consider her to be a friend or a foe?I’d say Leann is very ambitious, and she is looking toward bigger things, as I imagine most of the characters in the show do. So, at the moment, she’s a friend, but who knows what will happen later.

What if she needed to take down Frank Underwood — is it possible?Well, it was definitely fun getting to go toe-to-toe with Kevin in the scenes. I like the fact that when she does enter any scenes with Frank, she’s not intimidated and she’s very strong and holds her own. It was great fun to get to play a character who’s strong enough to get to stand up to Frank.

Do you share any personal qualities with Leann that you were able to draw from in portraying the character?  I suppose the sense of being a woman working in a male-dominated world, I have an understanding of what that is. Being a driven person, from a very young age I’ve been aiming towards creativity, not driven politically or needing great success, but having an eye toward what I want to accomplish, and getting it. Leann is very different from anything I’ve done before, which is refreshing.

With the new season of House of Cards going on at the same time as today’s campaign, does the season have any real life political influence? Certainly in the sense that the season is engaging in a big political campaign, and that’s what’s going on at the moment. Beau Willimon is very good at keeping the show present, and I think that’s what was probably in his thinking of this year.

So… should I ask your opinion of what’s going on in politics right now?  I’m terrified. Truly terrified, to be honest. I would consider myself a Democratic socialist, I’m geared toward Bernie Sanders and Hillary Clinton. I’m terrified at the prospect of Trump getting into the office.

What would happen if Frank Underwood were to get into office in real life? I don’t know, although Frank’s tactics are terrifying, his intentions sometimes when it comes to politics are positive. I just hope nobody goes about it in the same way.