Attorneys for Spencer Elden, now 30, say the band “leveraged the shocking nature of his image to promote themselves and their music at his expense.” 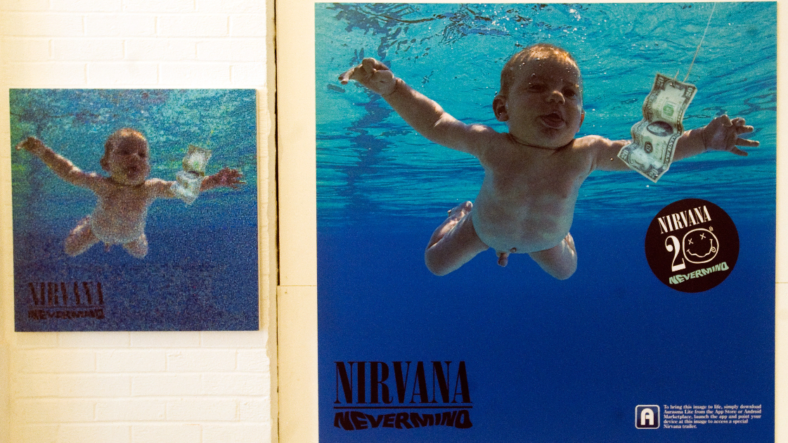 A lot can change in five years. In 2015, Spencer Elden, the man who as a baby graced the cover of Nirvana’s now-classic album Nevermind, posed underwater—this time in shorts—for a cover recreation.

As the 30th anniversary of the album’s release approaches Elden has let it be known through his attorney that he’s not actually cool with the cover after all. In court filings obtained by Variety, Elden is asking for $150,000 from individual defendants (surviving members of the band and Courtney Love, executor of Kurt Cobain‘s estate) and calling the image “child pornography.”

…Robert Y. Lewis, Elden’s lawyer, offers an unusual interpretation of the image to argue that it crosses the line into child porn, writing that the inclusion of currency in the shot makes the baby appear “like a sex worker.”“Defendants intentionally commercially marketed Spencer’s child pornography and leveraged the shocking nature of his image to promote themselves and their music at his expense,” reads the lawsuit, filed in the U.S. District Court’s central district of California and obtained by Variety. “Defendants used child pornography depicting Spencer as an essential element of a record promotion scheme commonly utilized in the music industry to get attention, wherein album covers posed children in a sexually provocative manner to gain notoriety, drive sales, and garner media attention, and critical reviews.”

Variety also writes that in addition to asking for at least $150,000 from Dave Grohl, Krist Novoselic, and the Cobain estate, the suit seeks compensation from “photographer Kirk Weddle; art director Robert Fisher; and a number of existing or defunct record companies that released or distributed the album in the last three decades.”

Even Chad Channing, the drummer Dave Grohl replaced the year before Nevermind‘s release, has been named in the suit.

Elden and his attorneys may not have banked on the social media reaction to news of the suit, which was not uniformly positive, to say the least.

Traded on the ‘Nirvana baby’ nickname all his life and happy to recreate the image for a payout but now wants financial redress for emotional damage. 🤔 #NeverMind #nirvana pic.twitter.com/L5Q5UglRG2

If the judge doesn’t open the hearing by turning to his counsel and saying “here we are now, entertain us” then what is the point https://t.co/SmDY7cZ913

Oh hell no.
I know I’m a victims rights lawyer and all. But nope. No. https://t.co/e2viIo6eNu

It’s fair to note, as Variety does, that Elden’s parents only received $200 for the shoot, and despite his apparent embrace of all the attention surrounding the cover, Elden has made statements in the past that made it clear he was pretty conflicted about his legacy.

The new wrinkle in this lawsuit is Elden’s attorneys go all-in on the “child pornography” accusation, writing in part:

In 2016, Elden outlined what was so troubling to him at the time about his legacy in an interview with Time, saying “It’s a trip. Everyone involved in the album has tons and tons of money. I feel like I’m the last little bit of grunge rock. I’m living in my mom’s house and driving a Honda Civic.”

Elden even admitted in the Time article that he’d looked into some kind of legal action against Geffen Records, but it didn’t work out.

If nothing else, this time Spencer Elden has certainly found attorneys who know how to get some attention to his cause.