Not what we were expecting. 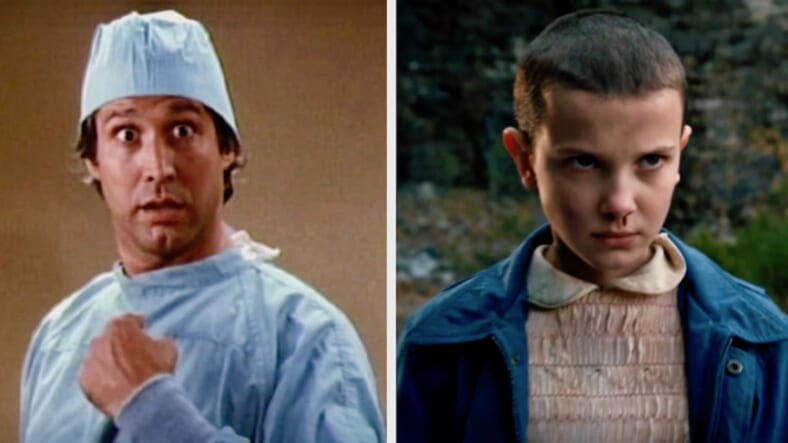 Don’t expect the upcoming third season of Netflix‘s massive hit Stranger Things to be all doom and gloom.

In the cult flick, Chase plays a go-getter newspaper reporter who changes his identity at the drop of a hat in order to snag the juiciest story. And along with new imports Cary Elwes as the self-serving Mayor Kline and Maya Hawke as Harrington’s fellow ice cream scooper, a character likely to channel Chase’s signature wiles is Jake Busey’s Bruce, a “journalist for The Hawkins Post, with questionable morals and a sick sense of humor.”

In case you missed it, here’s the hilarious teaser trailer for Season 3, set in a shopping mall straight out of the ’80s.

Here’s more about the new season.

But Season 3 will not be all fun and games for the folks of Hawkins, especially as Hopper takes on the role of legitimate adoptive father to Eleven (Millie Bobby Brown). “Their relationship is going to get far more complex, because, you know, things happen to girls and boys when they’re 13 and 14,” he said. “A lot of changes go on in the body and in your social life, and I don’t think he’s going to handle watching her become a woman in front of his eyes very well. That’s a horrifying thing for him — maybe even more so than fighting inter-dimensional monsters.”

Clearly, the team behind the show has a pretty solid sense of humor, which balances well against some of the series’ more horrifying moments.

And, who knows, maybe the Demogorgon has an intense hatred of ball bearings…

Season 3 of Stranger Things is scheduled to return summer 2019.