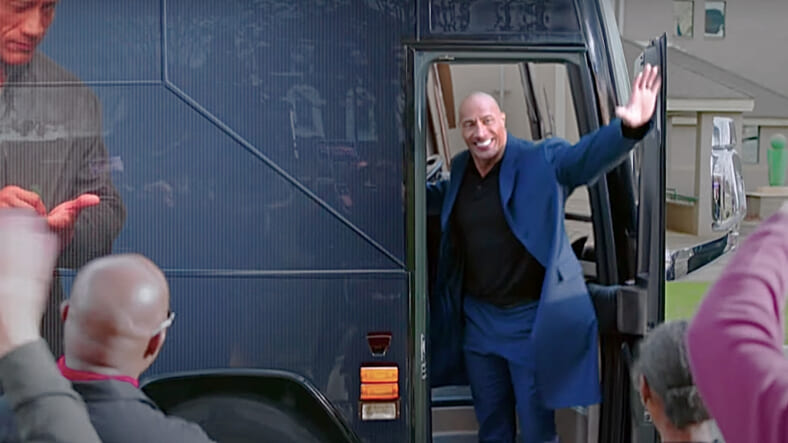 The money quote in this trailer for the upcoming NBC sitcom Young Rock is, where Dwayne Johnson is concerned, kind of an understatement: “I have had one hell of a life.”

Well, yeah. Currently one of the biggest stars in the world and easily the biggest action star of all time, “The Rock” went from the son of itinerant wrestler Rocky Johnson, sometimes living hand-to-mouth, to college football star, to WWE heel to mega-movie star and owner of an entire damn football league, the resurrected XFL. Now he’s the subject of a network sitcom, and it looks…surprisingly heartwarming and funny.

In the trailer, we get several insights into The Rock’s upcoming series: First, it appears to be told in flashbacks from the year 2032. Johnson would be closing in on age 60 but he still looks the same (which isn’t that hard to believe). He’s also running for president. Anyone who paid a bit of attention in 2016 knows that isn’t all that implausible, as many threw around the possibility at the time.

Second, flashbacks look in on The Rock at different stages of his youth and feature three young actors who are very well-cast based on their resemblance to photos of Johnson at those ages. The flashbacks also feature deceased wrestling luminaries of the past like Johnson’s dad Rocky and Andre the Giant.

Dwayne Johnson’s superpower has always been the sense that for all his wealth and fame he’s still a grounded, thoughtful guy—and likely far more intelligent than the lunkhead stereotype that has long dogged men in sports that require long hours in the gym bulking up. It seems like nothing about his new show will change that.

Fans will know for sure if he’s got another big hit on his hands when Young Rock premieres on February 16, 2021, on NBC.