“I have sh*t myself on mushrooms before.” 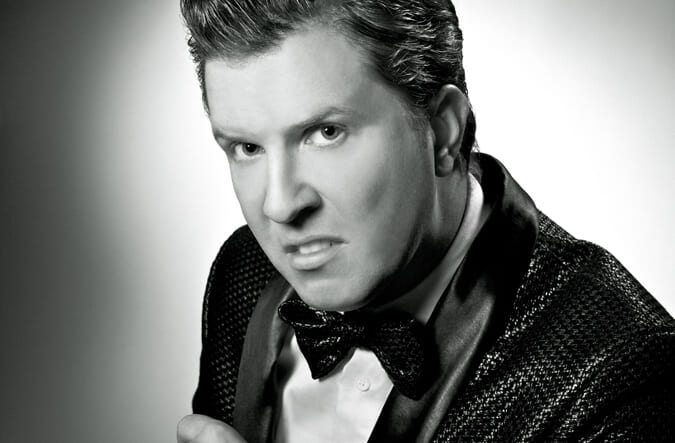 After years of playing roles like Terry, the roller-skating gay prostitute in Reno 911, the stand-up comic and film star is letting someone else be the most insane person in the room. With Typical Rick, those honors have been passed to Simon Rex, who plays Rick, the friend and constant foil to Swardson’s Gary, a struggling actor eager to strike it big in Hollywood.

Teaming up once again with the director of his cult hit Grandma’s Boy, Nicholas Goosen, Swardson may have ceded the bulk of the crazy to Rex, but together they’ve created something absurdly hysterical. To celebrate the release of Typical Rick’s second season, we called Swardson to chat about tripping on mushrooms, buying guns, and getting naked.

Typical Rick has a pretty unique format, with each episode lasting ten minutes or less. Did you and Nick Goosen initially conceive this show with that format in mind?

So I was drunk one time—just once—and I was with Nick. We were sharing stories about what a nightmare it is when you have a buddy that implodes everything. It’s always a disaster. I’ve worked with Comedy Central on-and-off for twenty years now, so I always bring them shows. We had developed a show that was a half-hour, scripted show that was like a comedy Sons of Anarchy. It was me as the lead. It was called Falcon. They were like, ‘No, we don’t really get it. Do you have anything else?’ So I said I had this show, Typical Rick, and I pitched them like two sentences.

They said that they wanted to do streaming, and asked if we would be interested. They said with streaming we could do whatever we wanted. We could swear. We said yes. It’s short-form, which is less money, production-wise, but we didn’t really care about that. We just cared about executing an idea that we liked and having the full creative vision behind it.

Although you’ve played the straight man before, in this series you’re not the most insane character. Was there a desire on your part to take on the comedy that comes with not being the craziest person in the scene?

There was 100% that motivation behind it. I’ve done that for so long, and it’s fun to do, but after a while, it’s like that’s not the only thing I can do. I wanted Typical Rick to showcase that. I like roles that aren’t completely insane. It’s fun for me to not have to put on a crazy fucking wig or some crazy shit. Again, those roles are super fun, but I want to go another way where it’s more me being me.

There’s an episode in the new season where Rick wants to buy a gun. Have you ever had to try and talk a friend out of buying a gun?

For sure. I have friends who have guns. I’ve wanted to buy a gun. That one is more based on like me and my buddy Will, who lives with me. I was thinking about getting a gun because I get kind of nervous when I’m home alone. All my friends were like, “No, that’s a horrible idea. That’s like a really bad idea.” That one’s based on me more than anybody.

In another episode, a girl overhears Gary and Rick rehearsing for a part and thinks they’re from the South, so they decide to pretend they actually are. Have you or a buddy ever used an accent to try and get a girl?

I won’t name names but one of my friends will go into being British, and that’s like a thing that he does. He started adapting a British accent. He lives in New York, and so he would do that to throw game out. I’d go, “You know that this can’t last. What if you pick up this chick and you really hit it off? There’s no longevity here without you looking fucking super weird.” Unless she’s mad chill and thinks it’s funny, but otherwise it’s like super weird.

One of new season’s highlights is an episode where Rick doses Gary with mushroom tea, causing him to eventually soil himself. Is that based on anything?

That’s half-based on me. I have shit myself on mushrooms before. The first time I took them was in high school. All of my friends and I ate them and then we were going to go see a movie. Within like ten minutes of eating them, I started screaming. I was like, “You’ve gotta turn the car around!” So they had to go back to my house and I went and I had diarrhea. I lived with my mom, obviously—I was in high school—and then I started tripping, so I was like shitting and tripping.

My mom thought I was going to a movie, so she was confused. She asked my why I was back and I said it was because I had to use the bathroom. She said, “OK, well come talk to me for a minute.” I was like, “FUCK.” It had been like 25 minutes at this point, so I was starting to really trip and then I’m talking to my mom—this is a true story—and she had snowflakes all over her face. They were like glowing. We had taken a lot. So she had all this glowing shit on her face, and I start laughing. She goes, “Why are you laughing?” and I go, “Oh my friend just told me this really funny joke.” She goes, “Oh. What’s the joke?” And then I just go, “I have no idea.” I was laughing at a joke that I don’t even know. Immediately I was like, “I got to go to the movies” and I just left. It was super embarrassing.

In that same episode, you have a great cameo from Charlie Sheen. How did you get him on the show?

He has been a friend of ours for a long time. I’ve known Charlie on and off for like 20 years. He was a fan of mine, like way back in the day when I was doing commercials for Barq’s Root Beer. He was a big fan of those, which is so bizarre. He’s also a friend of Simon’s, so we’ve always tried to find something for him.

That part in Typical Rick was basically written for him. He’s the best. He’s the nicest dude. It’s so funny because he’s really normal and down-to-Earth, and then you read all this stuff in the press and it’s like a whole different side of him.

We had no budget. We shot that scene in this hot, non-air-conditioned room in the middle of fucking nowhere and he just showed up and didn’t complain. We had no dressing room, but he just sat there and smoked cigarettes in the heat and was just totally chill. He was game for anything. We asked him if he would put on lipstick and was fine with it. He was completely creatively open to whatever, just as long as it was funny. That’s the most ideal thing you can have with any actor, is when all they want is for it to be the best and funniest it can be, and they’ll go to any length for that.

Does it ever blow your mind that part of your job is to tell a prop department what kind of vomit you want to use in a scene?

I don’t really realize it anymore. I’m so used it because I had that show Pretend Time on Comedy Central and we were so in the eye of the tornado writing those sketches that were so crazy and aggressive. I’m so desensitized to doing stuff like that now.

There was a sketch on Pretend Time where we had to make diarrhea and semen and urine and I had to like put it in my mouth and on my face. We were going through textures and I was like, ‘No, this diarrhea doesn’t look real.’ It was so bizarre. I’m like a full-blown adult getting into weird arguments with people about fake vomit. It just doesn’t make any sense.

What do you think makes you and Nick Goosen work so well as a comedic team?

He trusts me as an actor and as a writer, and I trust him as a director. People don’t realize how talented he is, and how he can do a lot with nothing. For the Director’s Guild, you have to have people that sign their names to vouch for you. The two people that signed for Nick were David Fincher and Paul Thomas Anderson. He knows so much about movie-making, and I don’t. I’m a student of film too, but I don’t know how to fucking make a movie. We have some really great projects in development that are going to be awesome. We’ve got two features we’ve been developing, possibly three, and we’re hoping to blow it out with me and him really taking it to another level in the next three or four years.

How important is to just fully commit when you’re doing these kind of out there, under-the-radar comedy projects?

When younger actors or comedians ask me for advice, I always tell them that you’ve got to commit, whatever the part calls for. If someone asks you to try something, you have to just go for it!

I did this movie, A Haunted House, with Marlon Wayans, and there was a scene where Marlon said, “Hey, what if you’re naked in this?” Like fucking full on naked. He goes, “Yeah, I thought it would be funny if we just added this part and you’re just totally naked trying to find my character with a night-vision camera.” I was like, “Yeah, OK.” So I was just totally fucking naked. We just filmed this scene and I was walking around the set naked. You have to go 200% with everything.