The mild-mannered comic is one to watch. 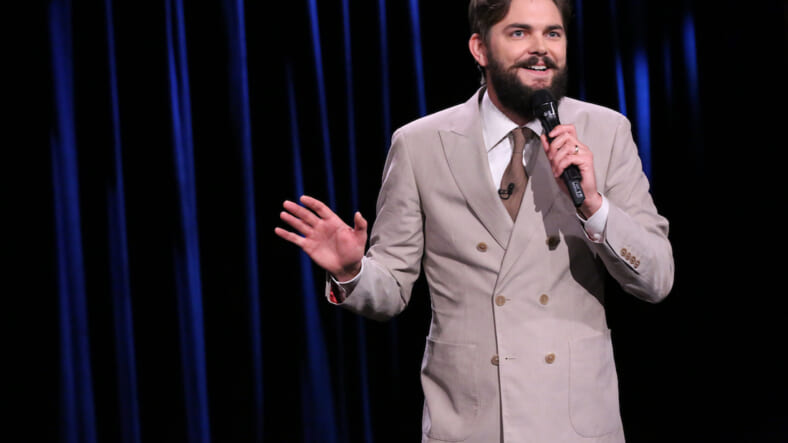 Maybe it’s the lustrous hipster beard, penchant for flannel or that he’s always hiding behind an acoustic guitar, but there is an undeniable soft-spokenness to stand-up Nick Thune, a rarity in an industry that prizes over-delivery and shock comedy.

It may not be so easy to recap his jokes drunkenly at a bar as those of say… Chris Rock, but watching a Nick Thune comedy special is like no other. You witness this slightly gawky dude take the stage, strum his guitar and slowly deliver his turn-of-phrase punchlines, and you wonder, “Will this guy be funny?” But once you’ve settled in, you’re just trying to keep it together as he coyly delivers one uproarious laugh after the next, such as “C-Sections are like the DiGiorno of pregnancy… because it’s not delivery.”

So we were surprised to see that for his latest special, Good Guy, Thune is doing this raw, without the guitar to supplement his jokes. “When you stand behind a guitar for nine or ten years, it definitely feels a little weird not to have it,” Nick recently told us. “But I had to break my arm to get there.”

The resulting hour-long special is the most uninhibited we’ve seen him. In Good Guy—available now on NBC’s digital comedy platform SeeSo—topics include his unborn son’s penis, nearly killing his dog with edible brownies and all the various missteps he’s taken trying to be a “good guy.” It’s perhaps a more head-on introduction to a comedian who will increasingly be on your radar.

For one, he is co-writing an upcoming ABC series, tentatively titled Holy Sh*t, wherein he plays a young pastor fighting to protect his small local church from a corporate mega-church takeover. “This show isn’t about religion,” Nick said. “It’s a workplace comedy about interesting people that happens to be set in a church.”

Maxim recently caught up with Thune about his new special, his unusual parenting techniques, how he became the not-so breakout star of Knocked Up, budding heads with Ashlee Simpson’s guitar player (remember her?) and his forthcoming church-set workplace comedy.

When did you break your arm?

I was in Tampa, and I tripped on a trolley track at like 1am carrying a pizza with my left arm. I fell down and broke my right elbow and right wrist, but I saved the pizza, which in the end I think is what everyone wants to hear out of that. Then I had to go on stage without a guitar for about a month and loved it. That month is when I realized what my next special was gonna to be.

Don’t tell me the beard is next. You may jeopardize your lumbersexual demographic.

I think I need to get rid of it. I was 20 years old, and I just wanted to grow a beard so bad because I could, and then I just haven’t gotten rid of it since. I definitely fantasize about having sex with lumberjacks, but I think it’s maybe time to move on.

For shame. Have you tried any new trendy parenting techniques since becoming a father?

Yeah, we’ll go to a movie and just kind of leave him in the car, and we’ll go out and check on him every 30 minutes or so. It’s called illegal parenting; it’s a new technique we’re working on. These are really good lessons for him so he learns he’s not number one—that mom and dad have lives.

Your first big acting credit was on the film Knocked Up. How was that experience?

Well that was meant to be a much larger cameo, but they cut that scene down. Judd Apatow and Seth Rogen were like, “We actually think this guy could have been her ex-boyfriend, and then she got pregnant with this guy.” So I was supposed to be like, “Wait a minute. We were just dating, and you had his baby?” That was the way the scene was supposed to go. I remember being pretty excited to go see it in the theater and then saw that, and I was like, “Well that’s a bummer.”

So that wasn’t your big break?

I think everybody thought it was gonna be, but I dunno… I’m still waiting on it. I prefer small breaks. The most frustrating thing is it’s one of my most top-listed things when you Google me, but I’m in it so fast. People come up to me and are like, “Oh, you were in Knocked Up! You must have been the roommate.” People think I was Martin Starr. I’m like, “No, that was Martin Starr. I was the guy who wasn’t really in it.”

How was working with Katherine Heigl? She doesn’t exactly have the best reputation.

She was so sweet. I think I even talked to her husband on the phone at some point. She was already famous from Grey’s Anatomy or whatever show she was on. It was all so surreal, and I wish I remember.

Have you had any bad run-ins in Hollywood?

When I first came out to L.A. and started doing stand-up, I got a lot of jobs working on reality TV shows, like Nanny 911. The last paid job I had in production was on an MTV show called Ashlee Simpson’s 21st Birthday, and it was an hour-long standalone special of her in Vegas celebrating her 21st birthday with friends and family. This was like the week after she got caught lip-synching on SNL. I remember this one moment when she was having dinner with all these faux celebrities around her, and then Ashlee had to go back up to her room to change outfits or something. At one point, the director ran up to me and said, “I have to go up to her room. We’ve got to catch this on camera. I need you to make an announcement to the group that at midnight we’re all going to meet at table 15 for her to gamble for the first time or drink as a 21 year old in Vegas or whatever.” And they all leave, and I’m stuck to go into this room where people like Jessica Simpson are sitting. It’s about 100 people, and there’s no microphone.

So Ashlee Simpson inspired you to take comedy seriously as a career? Inspiring stuff.

I think the reason it was my last job was because I could not believe that somebody with… I’m gonna stop myself from saying something terrible… that people were following her around with a camera. I was like, “Fuck this! She should be on this side of the camera! I should be on that side of the camera!” And then that basically pushed me into being a comedian finally, seeing someone like her.

Tell me about your upcoming TV show, Holy Sh*t.

That might not be the title. Some people aren’t so crazy about it, but I love it. It’s a workplace comedy that takes place in a church, a super original kind of environment for that type of show that hasn’t been seen before. People never think about how there are actually offices and people that run a business, so it will focus on the business side of the church.

If you look at any statistics, less people are going to church than ever before, and there used to be a church on every corner. Now the most popular churches are these large mega-churches with these pastors that you never even get to spend time with. This show is about one of those small churches being swallowed by one of those big churches.

I say this in my special, but I watched this video of a pastor that literally begins his sermon with, “I never forget when I was five years old, and I got lost at a grocery store. Have you ever felt lost?” That’s just bad speaking. The way that he holds the microphone and the clothes that he wears are ridiculous so I was like, “Okay, that guy needs to be made fun of. This whole thing needs to be made fun of. And why isn’t there somebody out there doing it?”

Are you religious yourself?

It’s hard to tell. I struggle with it like any regular person should, and man… I wish in my heart of hearts that there is somebody who is taking care of me and looking out for me, but in my cynical mind, that’s sometimes difficult to believe in, and I bounce back and forth. Is that too deep of an answer for Maxim…?